This paper proposes a system of Robot that follows the wall. Now a day’s world moves toward Robotics. Starting from the gesture, line follower and Path follower several Path estimation algorithms are developed for robotic movement. Line follower user IR sensor to travel along the line. If the line is detected means it taken as 1 otherwise it becomes zero. The same mechanism is used here instead of IR we use ultrasonic here. Ultrasonic Range sensor it gives the obstacle distance values based on the distance robot will move. We set some condition by using the distance values. If the distance is less than some preset value means it move. Consider the robot is placed 10cm from the wall it moves and follows that wall. Otherwise, it changes its direction according to the wall. This used in many applications like surveillance in military purpose. This employs low cost and Compact in nature.

Wall-following, navigation, parallel parking and path tracking, control are an essential issue in robotics and artificial intelligence. For the realization of mobile robot navigation and parallel parking in an unknown environment by behavior-based on designed. However, wall-following control behavior is very important for mobile robot behavior. On the traditional control methods, the performance of the robot depends on the robot sensor accuracy, wherefore performance of the robot by interference from noise. Every Robot has own Advantages and disadvantages.

In the existing system, they are used in a robot which follows color line neglecting the white area it is called a Line Follower Robot. This robot consists 2 DC motors which are connected in form of H-bridge connection with Driver IC. IR sensor is used to detect that Color if it is black or Blue means it is taken as 1 otherwise it takes like 0. It follows that dark color lines only.

In the existing system, they use IR Sensor to find out that dark region robot travels on that dark region only. In this system, we change that sensor Instead of using IR sensor we go for Ultrasonic sensor Range detection sensor HC SR05. It gives distance values based on the distance value robot will move. We only fix the condition for robot traveling if the distance value is less than some preset value it will follow the wall unless it changes its position by itself. This is a basic prototype which can be further developed for applications like automatic window glass cleaner, floor cleaner and for some surveillance systems. 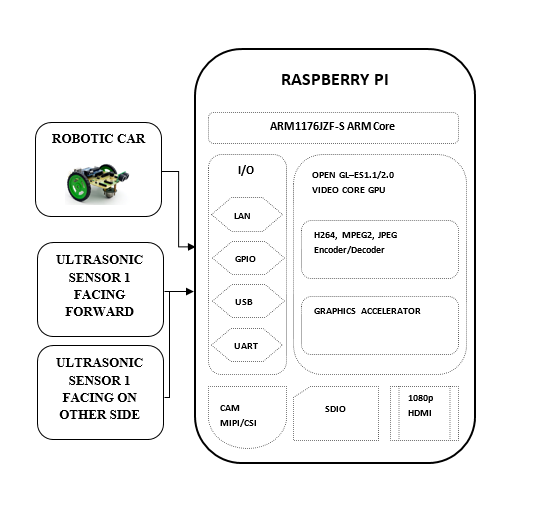 The overall system consists of Raspberry as a heart of the system is interfaced with two Ultrasonic Sensor, L293D – Motor driver and DC motor. If we set the condition the ultrasonic value is within the limit of some preset value means it automatically follows the wall without any human intervention. If is greater means it automatically changes its path. It is just a prototype to build more application based on object follower based on distance.

By using the simple components like sensor, driver circuit and DC motor we can design one robot it performs wall following operations. By using these basic components, we can design various robots like Obstacle Avoidance. This is the basic Robot employed in a wide variety of applications.