The Internet of Things (IoT), as expected infrastructure for the envisioned concept of Smart City, brings new possibilities for the city management. IoT vision introduces promising and economical solutions for massive data collection and its analysis which can be applied in many domains and so make them operate more efficiently. Normally there is one of the most challenging issues – municipal waste-collection within the Smart City. To optimize the logistic procedure of waste collection. The presented solution provides a calculation of more efficient garbage-truck routes. As an output, we provide a set of simulations focused on the mentioned area. If the dustbin it fills we get some alert via the Buzzer also send the SMS to an authorized person in a particular time they didn’t response we will intimate to the higher authorized persons.

The Smart City represents nowadays hot topic in terms of improving living conditions. Considering mainly the situation in European Union, the EU national governments and also private companies are investing every year a significant amount of their budgets to research, development, and implementation of the concept of Smart City. The Internet of Things (IoT) is currently considered as a basic communication infrastructure for smart cities, where machines communicate automatically between each other. The biggest advantage is the cooperation of many different communication technologies and devices within one functional system, where a big amount of information and data are shared and used in a secure and smart way.

In the existing system, garbage is collected by the corporation by weekly once or by 2 days once. Though the garbage strikes and overflows the garbage bin and spread over the roads and pollutes the environment which produces air pollution causes several diseases.

In this Proposed System consists of a mechanical setup that separates the waste and Manages the waste in a different type of box by using automation. In this system, we detect the dry and wet waste also and this kind of waste we separate by automatically. By having such a system in multiple places every thing is monitored and controlled by centralized node using IoT technology 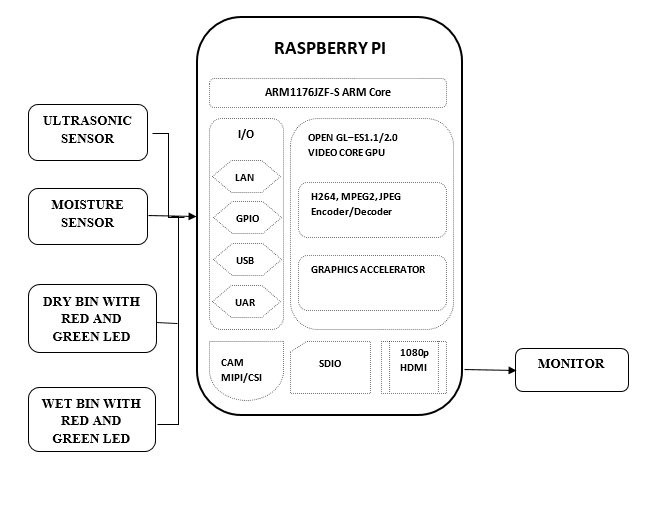 The article introduced the upcoming IoT infrastructure for smart cities and put it in the context of municipal waste management. Given overview showed that it is not yet enough discussed the possibility of using genetic algorithms as an optimization method for waste collection. This system result is based on the idea of IoT infrastructure, which should provide enough information to handle this Smart City issue more efficiently.