The main aim to his paper is to Provide a system to Paralyzed peoples they can travel by in a wheelchair independently without need another Person.  In Previous System they are giving remote control type of wheelchair controlling system is present in a wheelchair.   But this system is not helpful for all the paralyzed peoples because of handicapped people unable to move their hands freely. So, we go for some alternative solution is to Provides an eyeball-based wheelchair control. Camera Connected to the raspberry pi will capture the Eyeball and it fixes the centroid of the eye based on the centroid we track the position. Then the different variation on pupil position gets different command set for a wheelchair.  The signals pass the motor driver to interface with the wheelchair itself.  The motor driver will control both speed and direction to enable the wheelchair to move forward, left, right and stop.

Some people are not able to operate a computer because of an illness. The idea of eye controls of great use to not only the future of natural input but more importantly the handicapped and disabled. Moreover, implementing a controlling system in it enables them to operate a computer without the help of another person. It is more helpful to handicapped peoples. Those need to operate wheelchair without hand this one is most useful. Those can operate by movement of the eye. In this paper, Camera is capturing the image of eye movement. First, detect pupil center position of the eye. Then the different variation on pupil position gets different movement of the chair.  The Implementation process for Pupil detection using Raspberry Pi and on the terminal of the Raspbian image installed on the Raspberry Pi.

The Raspberry Pi is a credit card sized single computer or SoC uses ARM1176JZF-Score. SoC, or System on a Chip, is a method of placing all necessary electronics for running a computer on a single chip. Raspberry Pi needs an Operating system to start up. In the aim of cost reduction, the Raspberry Pi omits any onboard non-volatile memory used to store the bootloaders, Linux Kernels and file systems as seen in more traditional embedded systems. Rather, an SD/MMC card slot is provided for this purpose. After boot load, as per the application program, Raspberry Pi will get executed.

In the existing system, they are giving remote control type of wheelchair controlling system is present in a wheelchair.   But this system is not much help for all the paralyzed peoples because of handicapped people unable to move their hands freely. So, we go for Brain-computer interface based on the eye blink it moves that direction accordingly. It also has some limitation.

In order to overcome the limitation in the existing system, we go for the alternative method is Eyeball based wheelchair control. In this method, the camera is focused on the eye by using OpenCV we need to find out the centroid of the eyeball. By tacking the eyeball movement, we can move the wheelchair accordingly. It very useful for Elderly and disables people who need guidance to live. 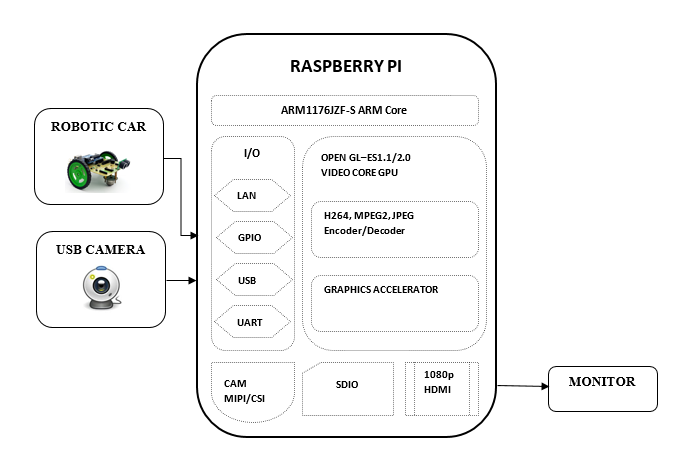 In this block diagram, the whole system is controlled by the Arm11 processor and this processor is implemented on the Raspberry Pi Board.  So, this board is connected with a monitor, camera, and SD card. Those all components are connected by USB adaptors.  Raspberry Pi is the key element in processing module which keeps on monitor’s eye movement by interfacing USB camera. The camera is capturing the image of eye movement. USB 2.0 makes USB Cameras ideal for many imaging applications.  USB Camera will be an interface with Raspberry Pi. Raspberry Pi will be using SD card, then the install Raspbian OS and open cv on the raspberry pi. Fist image will be captured by USB Camera.  Focus on the eye in the image and detect the center position of the pupil by open cv code. The robotic car is connected to GPIO pins of Raspberry Pi, based on the eyeball movement, car direction will change. The monitor is connected for visualization.

This paper has presented a wheelchair system using eye movements, in which pupil detection that is segmentation is done in which pupil looks is decided by fixing range to the particular direction as the user looks. Detection of pupil is done even on illumination unless the illumination is covering the whole eye, this is because when the light hits the pupil and illumination spreads on the pupil covering the whole pupil which ignores those pixels so as we treat the illumination spots it will leave behind a maximum change edges that cannot be determined and the operator will consider another position to be an iris location. This process works even if an image was taken in the little dark environment.