In this movie recommendation, the movies are recommended based on the content-based recommendation engine. In the project, we have a dataset of the movies. In that dataset, it contains director, keyword, genres, cast, etc. In content-based recommendation engine take input as user liked the movie. Then its analysis the content (which is dataset) like (genres, director, keyword, cast) of the input movie to find out other movies which have similar output. Then it ranks similar movies to its similarity score and recommends the movie to the user.

The popular based recommendation engine is nothing but trending list on YouTube, Netflix, etc. They will keep on tracking the video views and update the on-trending list.

Since the system uses the Scikit learning feature extraction text which converts a collection of a text document into matric token i.e. how many same words present in it. From that, it uses the pairwise to give the percentage related to the matric token.

So, it gives the similar movies ranks list related to the user movies. 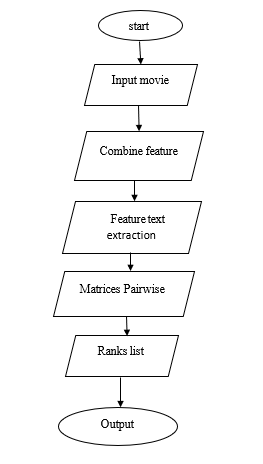 This block diagram tells the details explanation of code. If the user enters the movie name in combine feature will give the name, genres, keyword, cast, director of the movie. Then feature text extraction to pairwise and last the rank list.