The proposed fire extinguishing robot works in Automatic mode. The operation of robot is monitored and controlled by Raspberry Pi. A fire sensors are attached to the left, right and back of the robot, as the fire is sensed in the particular part it will automatically turn that side and will pump the water in the up and down motion the same way for the other sides also and for the front side if the fire is their it will automatically go back and pump the water. In automated mode, robot will detect the fire and move to the fire location and water will be pumped to extinguish the fire. Also IOT technology is used to control the robot from the web page and camera will be used to send the images of the particular location to the webpage to know the status of that area. It will be helped in order to reduce the human power and also make the work totally automatic.

Fire accidents is defined as an undesirable event which emits heat, smoke or flame. Fire accident is a major form of accident and can cause a huge number of causalities because of the danger and risk involved in rescuing victims out of the fire. When firefighting units engage in such situations there is a high possibility to loss the life of fire personnel’s. In everyday life, it is not feasible to always rely on human patrol for detecting and extinguishing fire at a fire accident scene. If an automated system is made to patrol the perimeter for fire accidents, then we can have an early warning system. This will be very effective in a fire accident in industries and residential areas where the fire possibilities are high. In order to achieve this, we must come up with an idea which can detect a flame, locate it and extinguish the fire immediately before it poses a threat to anything around it. For risky situations, it would be idealistic to send a firefighting robot that could quickly and efficiently find the fire and suppress it. Effective monitoring, high speed recognition, and extinguishing of fire are problems to be dealt with immediately. To reduce the risk of losing life in such situations, firefighting robots can be used. The automatic robot is designed to avoid further spreading of the fire that could lead to possible human causalities or damage to property. Firefighting robot will help the fire fighters to do their job effectively.

Automated mode, the robot is completely automated to search for the presence of possible flames and obstacles in the vicinity. The robot moves around and search for the signs of flame. The robot will search for flames using the three flame sensors placed in front of the robot. 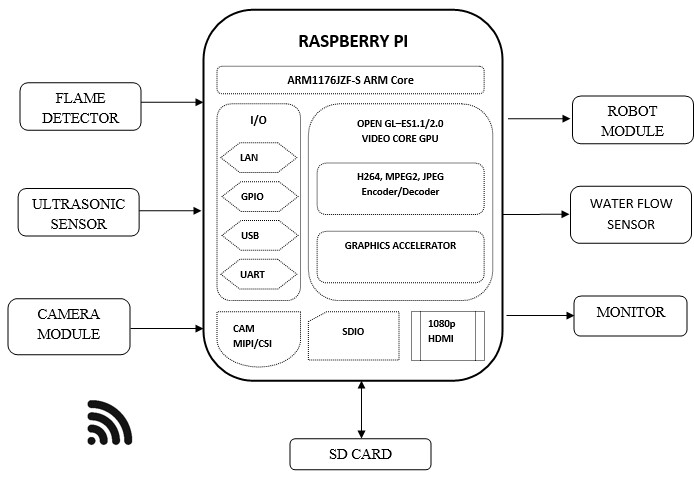 The Webcam Robot Can Be Used In Place Of Human Reducing The Risk Of Life Of Fire Fighters. We can use them in Our Homes, Labs , Offices, Industries, They Provide Use Greater Effiency  to Detect the Flame and it can be Extinguish before it become Uncontrollable and Treat to Life .hence This Robot can Play a Crucial Rule