Sound intelligence is added to a home automation for physically challenged people as a broad perspective of the thesis. Home automation  already  in  practice  is  by  switching  on  or  off  a device via wired networks. But this is inefficient for people with impairment in mobility or spinal cord disability due to ageing factors. The easiest way of controlling a device is through human voice.  This paper is presented with the concept of speech recognition being implemented to control the home appliances. Based on that voice command the appliances can be controlled. The  module  contains  a  secured  speech  recognizer  for automatic  door  opening/closing  and  a  general  voice recognizer to control appliances like television, music player, fan, light, etc. All the above are implemented in a low cost Raspberry Pi board.  Thus  a  goal  of  producing  an automation  device  has  been  designed  at  low  cost  using  speech recognition.

In the Existing system devices are controlled by sending messages serially through ARM controller.

In our proposed system speech recognition takes place. Through voice we can control the home appliances. 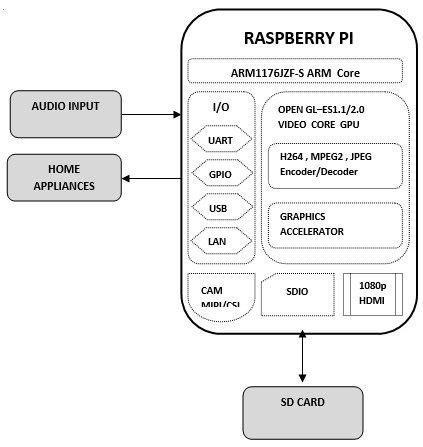 In  this block diagram the whole system is controlled by Arm11  processor  and  this  processor  is  implemented  on Raspberry  Pi  Board. So this board is connected with monitor, mike and SD card. Those all components are connected by USB adaptors. The system consists of Raspberry pi, SD card and personal computer. Operating system installed on SD card and then connected into Raspberry pi.  Raspberry pi is the key element in processing module.  First audio input is given to raspberry pi. Then it will converted into text based on that device can be controlled. This system is secured one. Authority person only able to give voice inputs