Now a days Robotics plays a major role in lot of Automation Fields. Robotic Actions become more efficient in upcoming years. Starting from gesture, line follower and Path follower several Path estimation algorithms are developed for robotic movement. Line follower user IR sensor to travel along the line.  The main aim of the Paper to Propose a system that has one robot which is used for Defense and Surveillance Application that work is to give live streaming about that place Controlling Action happens in webpage Provided by the Raspberry Pi’s Server. Live streaming can be happening through Local host connected to the Raspberry which Provides a local Server to control the raspberry pi. It Provides Low cost robot which performs all the surveillance operation with live Streaming.

Traditionally, surveillance systems are installed in every security critical area. These systems generally consist of high-quality cameras, multiple computers for monitoring, servers for storing these videos and many security personnel for monitoring these videos. When considered as a whole, these systems can yield great complexities while installing as well as for their maintenance. The CCTV camera feeds are only visible in certain locations and they also have limited range within which these can be viewed. Above all these, the cost of implementations of these systems is so high that they cannot be installed in every household. The CCTV cameras installed these days also have limited vision because they’re stationary modules. If an intruder moves away from the field of view of a CCTV camera, it cannot follow or track his motions. The solution to all the above issues is to have a surveillance robot which can monitor the areas where it’s installed and send notifications to the owner when an intrusion happens. It also allows the user to login to the Raspberry Pi’s webcam from any remote location and view live feed of whatever is happening in his premises. The cost effectiveness and remote-control features of the robot allow it to be used easily by every user.

In existing system, they are using Arduino based smart assistance Robot for smart surveillance and Defense application. System consists of Arduino UNO interfaced with Arduino cam – CMOS Camera is interfaced with Arduino video streaming can be displayed in a TFT Display. Main Disadvantage is live video can be seen while connecting to camera it can’t be streaming wirelessly. We can’t access the video on Remote places

In order to overcome the difficulties in Existing System here we use Raspberry Pi – 3 which is Single Board Computer it has capability of interfacing Direct Webcam it can take photos and videos by using python. We need to install apache sever on Raspberry pi and coding to be done on PHP then it is connected to local Server. Button to be created for controlling action for robot in webpage. Button are created by using HTML and Backend Program should be done in PHP. This Provides live video streaming in web page. That video can be accessed in remote places 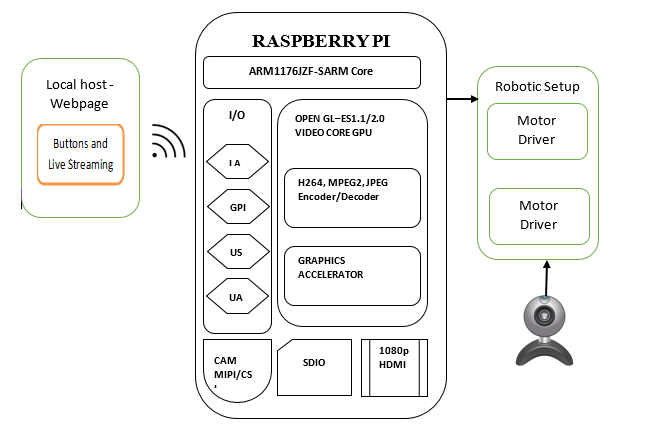 In this system is built with Raspberry pi – 3 it acts as a heart of the system and it consists of Robotic setup – Motor driver and DC Motor connected with webcam. Another side we have created one webpage which is running on local server by using HTML and PHP. In webpage some control option is there like Buttons. And It provides live streaming on webpage. Raspberry pi connected with robotic setup it can be accessed wirelessly.

Raspberry pi is running on Linux platform and it perform multi-tasking operations. Once the code is completed means we note down the Raspberry Pi’s IP address. In our PC go to web browser enter that IP address followed by slash followed by program name and click search means you get one web page with Some Buttons from that webpage we can control the Robot.

The advantages of installing such a system in every household is that it provides peace of mind to the user about his premises even when he’s not present at home. The low power consumption of this system enables it to be installed in any kind of household with ease. It can also be used for a long duration of time by using an appropriate battery. It will allow the system to be under working condition for weeks together. Even if a security camera has already been installed, this system can be added to it so that it can provide extra security. The users will be able to keep an eye on their loved ones at home, even if they are busy working in any other place.