With advances in computing and telecommunications technologies, digital images and video are playing key roles in the present information era. Human face is an important biometric object in image and video databases of surveillance systems. Detecting and locating human faces and facial features in an image or image sequence are important tasks in dynamic environments, such as videos, where noise conditions, illuminations, locations of subjects and pose can vary significantly from frame to frame. An automated system for human face recognition in real time background for a college to mark the attendance of their employees and students. So Smart Attendance using Real Time Face Recognition is a real world solution which comes with day to day activities of handling employees. Here multiple user faces are detected and recognised with the data base trained multiple texture based features.

LBP is a simple yet very efficient texture operator which labels the pixels of an image by thresholding the neighborhood of each pixel and considers the result as a binary number. Due to its discriminative power and computational simplicity, LBP texture operator has become a popular approach in various applications. It can be seen as a unifying approach to the traditionally divergent statistical and structural models of texture analysis. Perhaps the most important property of the LBP operator in real-world applications is its robustness to monotonic gray-scale changes caused, for example, by illumination variations. Another important property is its computational simplicity, which makes it possible to analyze images in challenging real-time settings.

ANN is the term on the method to solve problems by simulating neuron’s activities. In detail, ANNs can be most adequately characterized as “computational models” with particular properties such as the ability to adapt or learn, to generalize, or to cluster or organize data, and which operation is based on parallel processing. However, many of the previously mentioned properties can be attributed to nonneural models. A hybrid approach combining AdaBoost and ANN is proposed to detect faces with the purpose of decreasing the performance time but still achieving the desired faces detecting rate.The selected neural network here is three-layer feedforward neural network with back propagation algorithm. The number of input neurons  is equivalent to the length of extracted feature vector, and the number of output neurons is just 1 (), This will return true if the image contains a human face and false if it does not. The number of hidden neurons  will be selected based on the experiment; it Depends on the sample database set of images.

BY USING LBP BASED FEATURE EXTRACTION 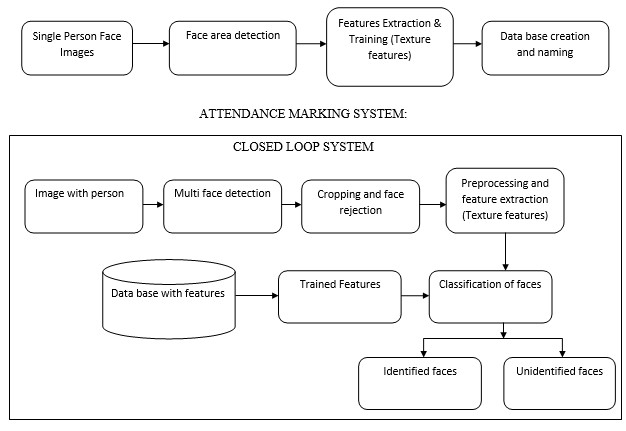