The object detection will be approached to cluster objects from the foreground with the absence of background noise.

The project presents moving object detection based on the SIFT algorithm for video surveillance system. The object detection will be approached to clustering objects from the foreground with the absence of background noise. Initially, it starts with feature matching by choosing the start frame or taking initial few frames with the approximate median method. Then, the complex wavelet transform is applied to both current and initialized background frame generates sub-bands of low and high frequencies. Frame differencing will be done in this sub-bands followed by edge map creation and image reconstruction. After the object detection, the performance of the method will be measured (between frame ground truth and obtained result) through metrics such as sensitivity, accuracy, correlation and peak signal to noise ratio. This object detection also helps to track detected object using connected component analysis. The simulated result shows that used methodologies for effective object detection have better accuracy and with less processing time consumption rather than existing methods.

Automatic visual detection of the object is a crucial task for a large range of home, business, and industrial applications. Video cameras are among the most commonly used sensors in a large number of applications which ranging from surveillance to smart rooms for video conferencing. Moving target detection means to detect moving objects from the background image to the continuous video image. Moving target tracking means to find various locations of the moving object in the video. There is a need to develop an algorithm for a task such as moving object detection. Currently used methods in moving object detection are mainly the frame subtraction method, the sift method and the optical flow method. Frame subtraction method is through the difference between two consecutive frames to determine the presence of moving objects. Its calculation is simple and easy to develop. For a variety of dynamic environments, it has strong adaptability, but it is most difficult to obtain a complete outline of the moving object, and so that the detection of moving object is not accurate. Optical flow method is to calculate the image optical flow field and do clustering processing according to the optical flow distribution features of the image.

We go with the video  input image and make them key points matching by using SIFT algorithm for the processing of image it clusters and signified the image in this  technology that uses the difference of the current image and the background image to detect the motion region , and it is generally able to provide data included object information. The background image is subtracted from the current frame. If the pixel difference is greater than the set threshold value T, then it determines that the pixels from the moving object, otherwise, as the background pixels and it classifies and tracks the moving image. 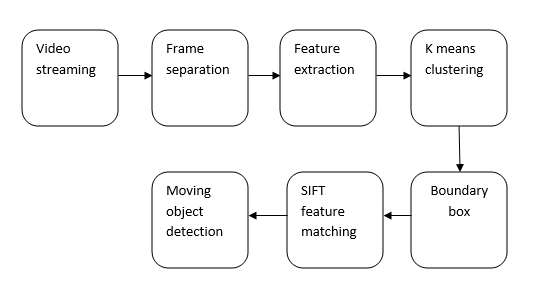 In the present work, a robust and sift algorithm and clustering process to object detection domain have been proposed. The performance of the proposed method has been evaluated and compared with other standard methods in consideration in terms of various performance metrics as discussed. From the obtained results and their qualitative and quantitative analysis, it can be concluded that the proposed method is performing better in comparison to other methods as well as it also capable of alleviating the problems associated with other spatial domain methods such as ghosts, clutters, noises etc