Introduction and Background of Image retrieval

The use of images in human communication is hardly new – our cave-dwelling ancestors painted pictures on the walls of their caves, and the use of maps and building plans to convey information almost certainly dates back to pre-Roman times. But the twentieth century has witnessed unparalleled growth in the number, availability and importance of images in all walks of life. Images now play a crucial role in fields as diverse as medicine, journalism, advertising, design, education and entertainment. Technology, in the form of inventions such as photography and television, has played a major role in facilitating the capture and communication of image data. But the real engine of the imaging revolution has been the computer, bringing with it a range of techniques for digital image capture, processing, storage and transmission which would surely have startled even pioneers like John Logie Baird. The involvement of computers in imaging can be dated back to 1965, with Ivan Sutherland’s Sketchpad project, which demonstrated the feasibility of computerized creation, manipulation and storage of images, though the high cost of hardware limited their use until the mid-1980s. Once computerized imaging became affordable, it soon penetrated into areas traditionally depending heavily on images for communication, such as engineering, architecture and medicine. Photograph libraries, art galleries and museums, too, began to see the advantages of making their collections available in electronic form. The creation of the World-Wide Web in the early 1990s, enabling users to access data in a variety of media from anywhere on the planet, has provided a further massive stimulus to the exploitation of digital images. The number of images available on the Web was recently estimated to be between 10 and 30 million figure in which some observers consider to be a significant underestimate.

The Need For Image Data Management

The process of digitization does not in itself make image collections easier to manage. Some form of cataloguing and indexing is still necessary – the only difference being that much of the required information can now potentially be derived automatically from the images themselves. The extent to which this potential is currently being realized is discussed below.

The need for efficient storage and retrieval of images recognized by managers of large image collections such as picture libraries and design archives for many years – was reinforced by a workshop sponsored by the USA’s National Science Foundation in 1992. After examining the issues involved in managing visual information in some depth, the participants concluded that images were indeed likely to play an increasingly important role in electronically- mediated communication. However, significant research advances, involving collaboration between a numbers of disciplines, would be needed before image providers could take full advantage of the opportunities offered. They identified a number of critical areas where research was needed, including data representation, feature extractions and indexing, image query matching and user interfacing. One of the main problems they highlighted was the difficulty of locating a desired image in a large and varied collection. While it is perfectly feasible to identify a desired image from a small collection simply by browsing, more effective techniques are needed with collections containing thousands of items. Journalists requesting photographs of a particular type of event, designers looking for materials with a particular color or texture, and engineers looking for drawings of a particular type of part, all need some form of access by image content. The existence and continuing use of detailed classification schemes such as ICONCLASS for art images, and the Opitz code for machined parts, reinforces this message.

Several methods for retrieving images on the basis of color similarity have been described in the literature, but most are variations on the same basic idea. Each image added to the collection is analyzed to compute a color histogram, which shows the proportion of pixels of each color within the image. The color histogram for each image is then stored in the database. At search time, the user can either specify the desired proportion of each color (75% olive green and 25% red, for example), or submit an example image from which a color histogram is calculated. Either way, the matching process then retrieves those images whose color histograms match those of the query most closely. The matching technique most commonly used, histogram intersection, was first developed . Variants of this technique are now used in a high proportion of current CBIR systems. Methods of improving on Swain and Ballard’s original technique include the use of cumulative color histograms , combining histogram intersection with some element of spatial matching, and the use of region-based color querying. The results from some of these systems can look quite impressive.

The RGB color model is composed of the primary colors Red, Green, and Blue. This system defines the color model that is used in most color CRT monitors and color raster graphics. They are considered the “additive primaries” since the colors are added together to produce the desired color. The RGB model uses the cartesian coordinate system. Notice the diagonal from (0,0,0) black to (1,1,1) white which represents the grey-scale. Figure 3.1.a (ii) view of the RGB Color Model looking down from “White” to origin. 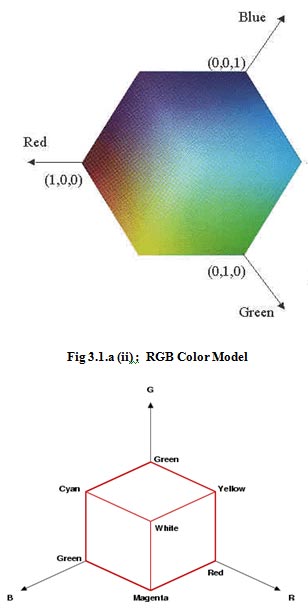 The HSV stands for the Hue, Saturation and Value. The coordinate system is a hexacone in Figure 3.1.b (a). And Figure 3.1.b (ii) a view of the HSV color model. The Value represents intensity of a Color, which is decoupled from the color information in the represented image. The hue and saturation components are intimately related to the way human eye perceives color resulting in image processing algorithms with physiological basis. 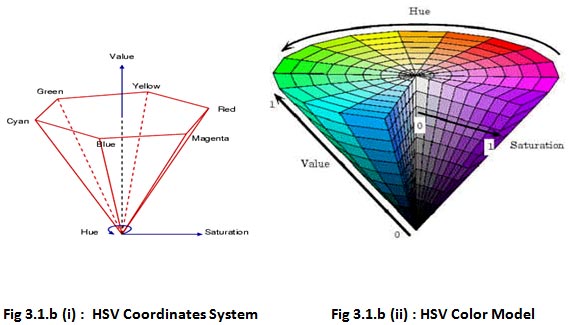 In Figure 3.1.c (ii), the obtainable HSV colors lie within a triangle whose vertices are defined by the three primary colors in RGB space: 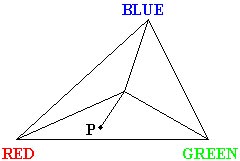 Conversion from HSV space to RGB space is more complex and given to the nature of the hue information, we will have a different formula for each sector of the color triangle. 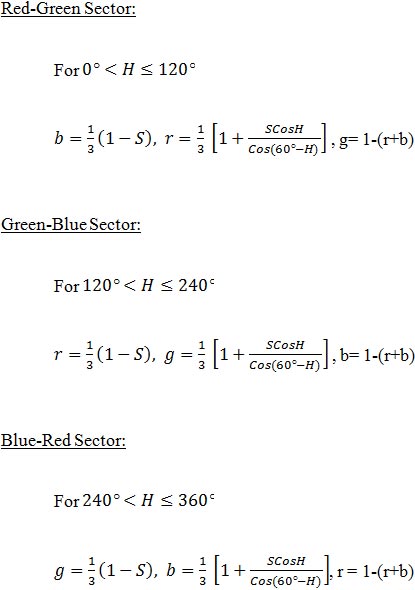 The color histogram for an image is constructed by counting the number of pixels of each color. Retrieval from image databases using color histograms has been investigated.

In these studies the developments of the extraction algorithms follow a similar progression:

Each of these steps may be crucial towards developing a successful algorithm. There are several difficulties with histogram based retrieval. The first of these is the high dimensionality of the color histograms. Even with drastic quantization of the color space, the image histogram feature spaces can occupy over 100 dimensions in real valued space. This high dimensionality ensures that methods of feature reduction, pre-filtering and hierarchical indexing must be implemented. The large dimensionality also increases the complexity and computation of the distance function. It particularly complicates ‘cross’ distance functions that include the perceptual distance between histogram bins [1].

An image histogram refers to the probability mass function of the image intensities. This is extended for color images to capture the joint probabilities of the intensities of the three color channels. More formally, the color histogram is defined by,

The RGB color space is far from being perceptually uniform. To obtain a good color representation of the image by uniformly sampling the RGB space it is necessary to select the quantization step sizes to be fine enough such that distinct colors are not assigned to the same bin. The drawback is that oversampling at the same time produces a larger set of colors than may be needed. The increase in the number of bins in the histogram impacts performance of database retrieval. Large sized histograms become computationally unwieldy, especially when distance functions are computed for many items in the database. Furthermore, as we shall see in the next section, to have finer but not perceptually uniform sampling of colors negatively impacts retrieval effectiveness.

However, the HSV color space mentioned earlier offers improved perceptual uniformity. It represents with equal emphasis the three color variants that characterize color: Hue, Saturation and Value (Intensity). This separation is attractive because color image processing performed independently on the color channels does not introduce false colors. Furthermore, it is easier to compensate for many artifacts and color distortions. For example, lighting and shading artifacts are typically be isolated to the lightness channel. But this color space is often inconvenient due to the non-linearity in forward and reverse transformation with RGB space

In this distance formula, there is only comparison between the identical bins in the respective histograms. Two different bins may represent perceptually similar colors but are not compared cross-wise. All bins contribute equally to the distance.

The color Histogram intersection was proposed for color image retrieval in [4]. Colors not present in the user’s query image do not contribute to the intersection distance. This reduces the contribution of background colors. The sum is normalized by the histogram with fewest samples. The color Histogram quadratic distance was used by the QBIC system introduced in [2]. The cross distance formula is given by:

Which corresponds to the proximity in the HSV color space

Thus in this phase we took a literature survey for various CBIR methods. The semantic gap between low level features and high level concept more and the retrieved output consisted lot of errors. Hence we wish to propose a new algorithm that retrieves the images based on color, texture and fuzzy features. Then integrated results will be outputted to the user. Hence the retrieval accuracy will be high and less interaction is needed. In this phase we propose two different algorithms, colour and texture based.

The similarity measure by a given query image involves searching the database for similar coefficients. Euclidean and quadratic distance is suitable and effective method which is widely used in image retrieval area. The retrieval results are a list of medical images ranked by their similarities measure with the query image.

The images in the database are ranked acscording to their distance d to the query image in ascending orders, and then the ranked images are retrieved. The computed distance is ranked according to closest similar; in addition, if the distance is less than a certain threshold set, the corresponding original images is close or match the query image. Precision P is defined as the ratio of the number of retrieved relevant images r to the total number of retrieved images n, i.e., P =r/n [1]. Precision measures the accuracy of the retrieval. 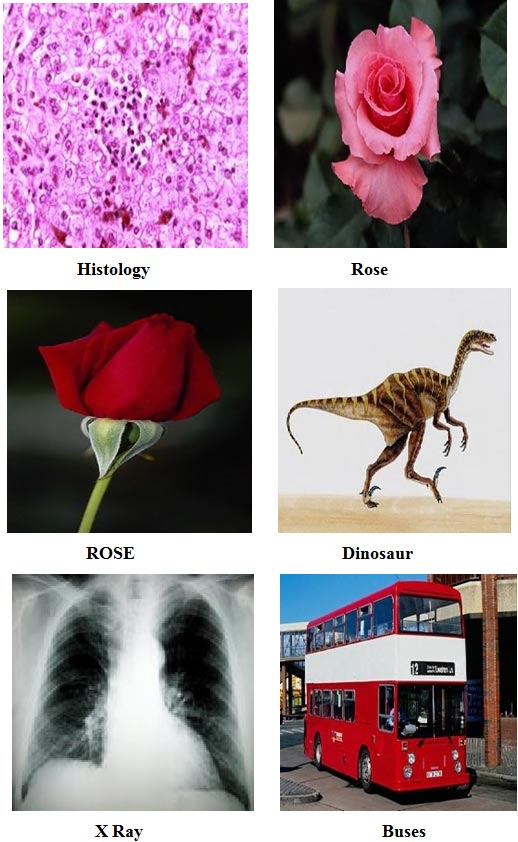 The below images shown RGB plane separation and its corresponding Histograms. 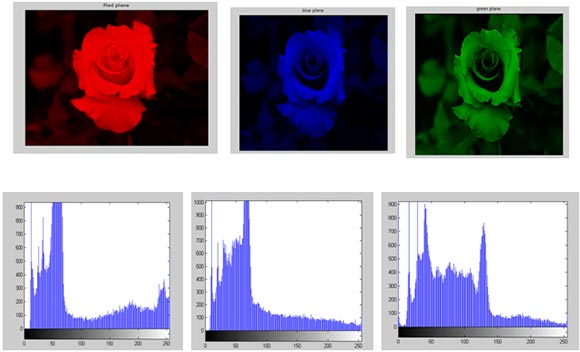 The Average Recall Rate (AVRR) is given by the equation 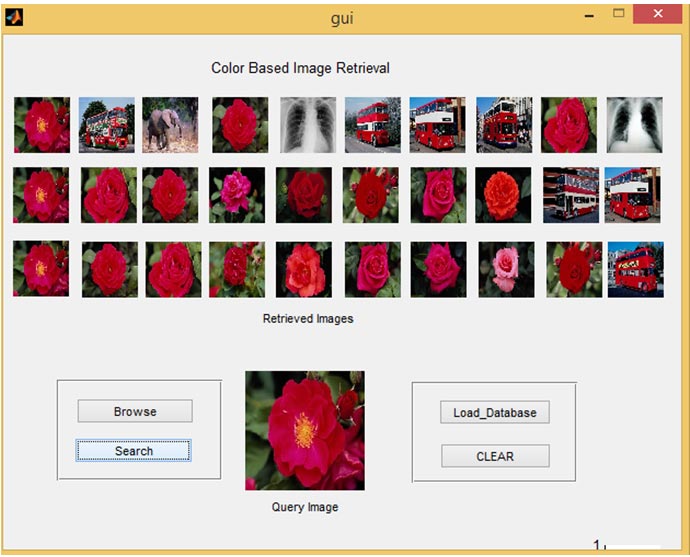 In this project it has been analyzed that an color features of image content descriptor .The timing results for the integrated approach is less and accurate, this can be improved by integrating other spatial relationship.