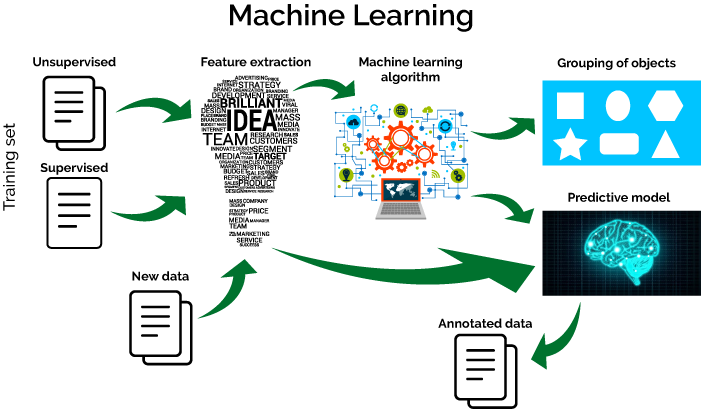 This block provides you the List of machine learning projects based on python,matlab and other langues.It is a collection of Machine learnign Ideas for student projects

In this Machine learning project, we will attempt to conduct sentiment analysis on “tweets” using various different machine learning algorithms. We attempt to classify the polarity of the tweet where it is either positive or negative. If the tweet has both positive and negative elements, the more dominant sentiment should be picked as the final label. We use the dataset from Kaggle which was crawled and labelled positive/negative. The data provided comes with emoticons, usernames and hashtags which are required to be processed and converted into a standard form. It also need to extract useful features from the text such unigrams and bigrams which is a form of representation of the “tweet”. We use various machine learning algorithms to conduct sentiment analysis using the extracted features. However, just relying on individual models did not give a high accuracy so we pick the top few models to generate a model.

This Project comes up with the applications of NLP (Natural Language Processing) techniques for detecting the ‘fake news’, that is, misleading news stories that comes from the non-reputable sources. Only by building a model based on a count vectorizer (using word tallies) or a (Term Frequency Inverse Document Frequency) tfidf  matrix, (word tallies relative to how often they’re used in other articles in your dataset) can only get you so far. But these models do not consider the important qualities like word ordering and context. It is very possible that two articles that are similar in their word count will be completely different in their meaning. The data science community has responded by taking actions against the problem. There is a Kaggle competition called as the “Fake News Challenge” and Facebook is employing AI to filter fake news stories out of users’ feeds. Combatting the fake news is a classic text classification project with a straight forward proposition. Is it possible for you to build a model that can differentiate between “Real “news and “Fake” news? So a proposed work on assembling a dataset of both fake and real news and employ a Naive Bayes classifier in order to create a model to classify an article into fake or real based on its words and phrases.

The accurate and reliable Trip-generation Forecasting Model is the most basic and important part of the traffic forecasting model. This project focuses on genetic algorithm which has an excellent Global search capability with trip-generation forecasting model in order to achieve the purpose of improving the accuracy of prediction. One of the difficulty in planning a road trip is deciding where to stop along the way. The U.S. is large and diverse, it’s especially hard to make a road trip that will appeal to everyone.The proposed system should satisfy the path constraints which should meet the drivers’ preferences as well as the alternative path constraints and limit the joint failure probability for candidate paths.

There are many inventories in in automobile industries to design and build safety measures for automobiles, but traffic accidents are unavoidable. There is a huge number of accidents prevailing in all urban and rural areas. Patterns involved with different circumstances can be detected by developing an accurate prediction models which will be capable of automatic separation of various accidental scenarios. These cluster will be useful to prevent accidents and develop safety measures. We believe to acquire maximum possibilities of accident reduction using low budget resources by using some scientific measures.

Methods in the domain of artificial intelligence (AI) have been applied to develop agents capable of playing a variety of games. Snake game is a computer game, whose goal is to control a snake to move and collect foods in the map. The single-player variant of Snake is a well-known and popular video game that requires a player to navigate a line-based representation of a snake through a two-dimensional playing area, while avoiding collisions with the walls of the playing area and the body of the snake itself. A score and the snake length are increased whenever the snake is moved through items representing food. The game thus becomes more challenging as the score increases. The application of AI techniques to playing the game of Snake has not been very well explored. In this project we work on techniques which are empirically compared against three Snake playing agents in terms of several performance measures(GREEDY, Hamilton, and DQN).

In order to improve accuracy and robustness of the lane detection in complex conditions, such as the shadows and illumination changing, a novel detection algorithm was proposed based on machine learning. After pretreatment, a set of haar-like filters were used to calculate the eigenvalue in the gray image f(x,y) and edge e(x,y). Then these features were trained by using improved boosting algorithm and the final class function g(x) was obtained, which was used to judge whether the point x belonging to the lane or not. To avoid the over fitting in traditional boosting, Fisher discriminant analysis was used to initialize the weights of samples. After testing by many road in all conditions, it showed that this algorithm had good robustness and real-time to recognize the lane in all challenging conditions.

The obsession of recognizing snacks and foods has been a fun theme for experimenting the latest machine learning techniques. The highest goal will be a computer vision system that can do real-time common foods classification and localization, which an IoT device can be deployed at the AI edge for many food applications.

Raspberry Pi 3, which is using the classical machine learning techniques on the extracted image features, the recognition results are far from impressive. Due to the difficulty of hand-crafted features are affected by background objects, lightings, object position in space and object category variations. In order to reduce the error rate, the environment is required to be fine-tuned; subsequently, the environment assumptions become unrealistic that cannot be deployed in real-life settings.

With the latest improvement on Convolutional Neural Network (CNN), the image classification accuracy has been leaps and bounce in recents years (since 2014). In many instances, AI can recognize objects better than human expert. As a food detection’s technologist, the Deep Learning method is the future of food watching.

Deep Neural Networks (DNNs) have recently shown outstanding performance on image classification tasks . In this project we go one step further and address the problem of object detection using DNNs, that is not only classifying but also precisely localizing objects of various classes. We present a simple and yet powerful formulation of object detection as a regression problem to object bounding box masks. We define a multi-scale inference procedure which is able to produce high-resolution object detections at a low cost by a few network applications.