This project explains breast cancer detection using neural networks .MIAS database has been used for testing the performance of the algorithm

Breast cancer is very common and is considered as the second dangerous disease all over the world due to its death rate. Affected can survive if the disease diagnoses before the appearance of major physical changes in the body. Now a day, mammographic (X-ray of breast region) images are widely used for premature revealing of breast cancer. Aim of the proposed system is to design a Computer Aided Diagnosis system (CAD) used to distinguish between benign (non-cancerous) and malignant (cancerous) mammogram. CAD system are used to help radiologist to increase his diagnosis accuracy. In the proposed system, texture features from mammogram were calculated using Gray Level Co-occurrence Matrix (GLCM) along 0°and DWT, from the calculate features most effective features having large contribution to achieve the desired output were chosen and applied to Probabilistic Neural Network (PNN) for training and classification, as ANN is widely use in various field such as, pattern recognition, medical diagnosis, machine learning and so on. For this research work mini-MIAS database is used and the overall sensitivity, specificity and accuracy achieved by using the proposed system is 99.3%, 100% and 99.4% respectively

Over the past few years, the cancer has been one of the most responsiblereasonfor the high number of deaths, and could become one of the main responsible cause for most deaths in the next decades. Cancer is a diseases in which cells in the body grow, change and multiply out of control. Usually, cancer is named after the body part in which it originates thus, breast cancer refers to the erratic growth of cells that originate in the breast tissue. In 2016, about 188,800 of the estimated 5,95,690 cancer deaths in the US will be caused according to a recent study by American Cancer Society epidemiologists. About 16,85,210 new cancer cases are expected to be diagnosed in 2016. About 595,690 Americans are expected to die of cancer in 2016, which translates to about 1,630 people per day [1].In India there are around 2.5 million living with cancer in India and will lead to 5,56,600 deaths per year.

Breast cancer has been rising steadily and is deadly killer disease of the new era. Breast cancer is the second leading cause of death in women all over the world and about 12% of women will suffer from this disease during their lifetime. The 1 in 28 women in India are likely to develop breast cancer.Breast cancer is the most common cancer in women in India and accounts for 27% of all cancers in women. In urban areas,1 in 22 women develops breast cancer during her lifetime as compared to rural areas where 1 in 60 women develops breast cancer in her lifetime[2].India is likely to have over 17.3 lakh new cancer and over 8.8 lakh death due to disease by 2020 with cancer of breast[3].Early detection & correct diagnosis of the disease can increase the survival rate of patients suffering from cancer to a great extent. Accurate early detection can effectively reduce the mortality rate caused by breast cancer. Masses and micro calcification clusters are an important early signs of breast cancer.

It is often difficult to distinguish abnormalities from normal breast tissues because of their subtle appearance and ambiguous margins.Computer Aided Diagnosis Systemare the automatic or semiautomatic tools which can help radiologist in early detection of breast cancer. Accordingly the cancer can be classified as benign,malignant or normal.

BI-RADS® is designed to standardize breast imaging reporting and to reduce confusion in breast image interpretations. It also facilitates outcome monitoring and quality assessment.In the BI-RADS edition 2013 the assignment of the breast composition is changed into a, b, c and d-categories followed by a description.

a- The breast are almost entirely fatty.Mammography is highly sensitive in this setting.

b- There are scattered areas of fibro glandular density.The term density describes the degree of x-ray attenuation of breast tissue but not discrete mammographic findings.

d – The breasts are extremely dense, which lowers the sensitivity of mammography.

A ‘Mass’ is a space occupying 3D lesion seen in two different projections. If a potential mass is seen in only a single projection it should be called  ‘asymmetry’ until its three-dimensionality is confirmed.

Overall system comprises of 4 stages, first one is acquisition of image, second extracting features from the mammograms, selecting more optimal features, classifier to identify appropriate class of mammogram and Discrete wavelet transform for segmentation  The suspicious parts were extracted from the mammogram by using texture features. Texture features are extracted using GLCM along 0° for each mammogram. Features represent image in a specific format that focus especially on relevant information. In the next stage features are selected for training and testing; this stage is very important because classification accuracy mainly depend on careful selection of features. In the other step mammograms are classified, for this neural network  is used as a classifier to distinguish mammogram and classify it into normal and malignant class. 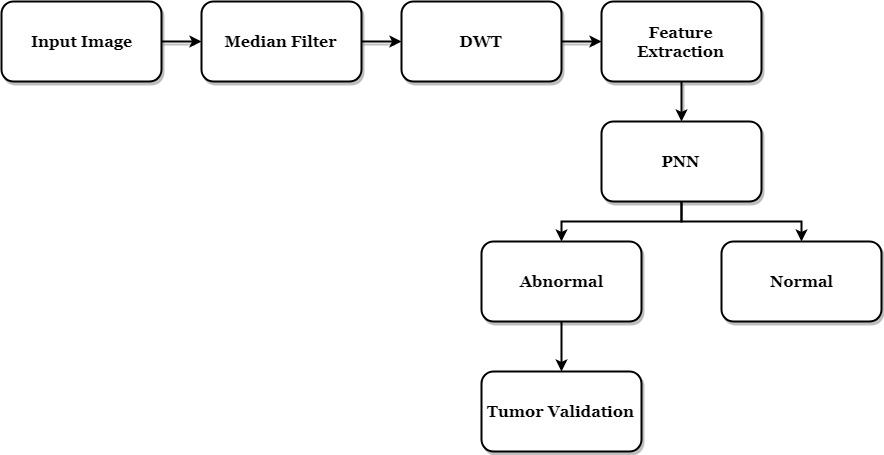 To reduce the death rate due to breast cancer it is very essential that cancer must be identified at initial stage. Mammograms from mini-MIAS database are used in this research work for experiment. This database comprises of 322 mammograms, out of which 270 are normal and 52 are cancerous. Ten texture features from the GLCM were calculated along 0°, Features space is further reduced to six features by using the rank features method. Results show accuracy of 100% for validation and test data, and overall accuracy achieved by using the proposed method is 99.4%.