When designing an autonomous Vehicle one must ensure that the communications paths to all major subsystems use a robust electrical signaling protocol. One such protocol is the LIN bus. This paper describes an effort to utilize a LIN bus to connect existing and new hardware on Vehicle. The work involved a redesign of the braking control system as well as the throttle controls. The redesign was necessary to replace obsolete or broken components, reduce the amount of extra wiring on board the Vehicle, and create a robust infrastructure for future expansion. A LIN bus control node was installed for each major component on the Vehicle as well as a master control node. The master control node now reads in signals from a remote control receiver and interprets them into commands for the other nodes on the LIN bus. Each node takes the commands received from the LIN bus and drives their respective components. A control node was developed to control the throttle and braking system. A second node was developed to control the steering control system. New control systems were developed for driving the brakes and the steering. The Vehicle can now be driven using a RC controller to operate the brakes, steering, and throttle, and is poised to accept new hardware to make it truly autonomous. 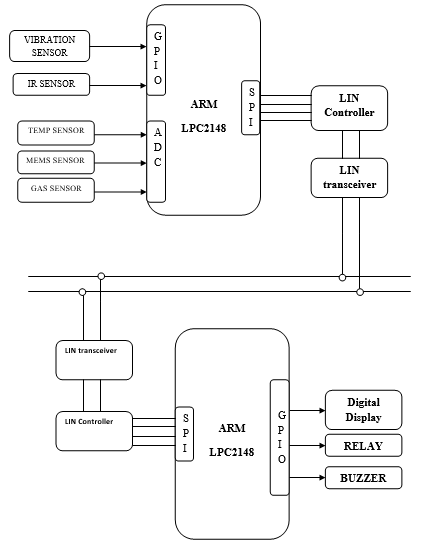 The system controls application through LIN PROTOCOL. The system controls application through LIN PROTOCOL. The LIN master controller can send complete message frames without interrupting the CPU. Generation of a new message frame is always initiated by a transmission-request command. This LIN master command forces the LIN master to send the LIN header field including synch break, synch field and a user-specified ID field. According to the LIN specification all fields are sent with LSB first Temperature is the most-measured process variable in industrial automation. Most commonly, a temperature sensor is used to convert temperature value to an electrical value. Temperature Sensors are the key to read temperatures correctly and to control temperature in industrials applications. A gas detector is a device which detects the presence of various gases within an area, usually as part of a safety system. This type of equipment is used to detect a gas leak and interface with a control system so a process can be automatically shut down. MEMS are separate and distinct from the hypothetical vision of molecular nanotechnology or molecular electronics. MEMS are made up of components between 1 to 100 micrometers in size (i.e. 0.001 to 0.1 mm), and MEMS devices generally range in size from 20 micrometers (20 millionths of a meter) to a millimeter (i.e. 0.02 to 1.0 mm). They usually consist of a central unit that processes data (the microprocessor) and several components that interact with the outside such as micro sensors