A shopping trolley is a necessary tool for shopping in supermarkets or grocery stores. The trolley is the important thing is present in every supermarket to carry loads. On the other hand, if the trolley is full means it difficult to carry by elderly people. And it is inconvenient and time wasting for customers when the Rush time in the supermarket to search particular Product. So, in this paper we propose one system it carries the Product and it acts as a Human-Follower it becomes more convenient for Elderly People. To perform obstacle avoidance mechanism the system is equipped with an ultrasonic sensor with human tracking and following to track the user.

Until Recently Computers Had A very restricted view of the world around them, and users had very limited ways of communicating with computers. Over the years, computers have acquired cameras and audio inputs, but these have been used mostly for unrecognized input; computers can store and play such content, but it has been very difficult to make computers understand input in these forms. For example, when people hear a sound, they can make judgments about the distance and direction of the sound source relative to their own position. Until recently, computers had more trouble making such judgments. Audio information from a number of microphones does provide considerable information about the distance and direction of the audio source, but determining this information is difficult for programs to do. Similarly, a video picture provides an image of the environment for the computer to analyze, but a computer has to work very hard to extract information about the objects in pictures or video because an image shows a flat, two-dimensional representation of a three-dimensional world.

In Existing system robot with ultrasonic Sensor is employed if the distance is exceeding the Particular or pre-set value means It will move forwards and follows the person. But it has some limitation is there ultrasonic is not that much accurate. And it if Group of people is there it will not follow the Correct Person.

In order to overcome the disadvantages in the existing system, we go for the camera-based system to recognize and track the object using OpenCV technology. The trolley is fixed with a camera and Programmed by Open CV to extract the human features and track the human path to move the trolley accordingly. 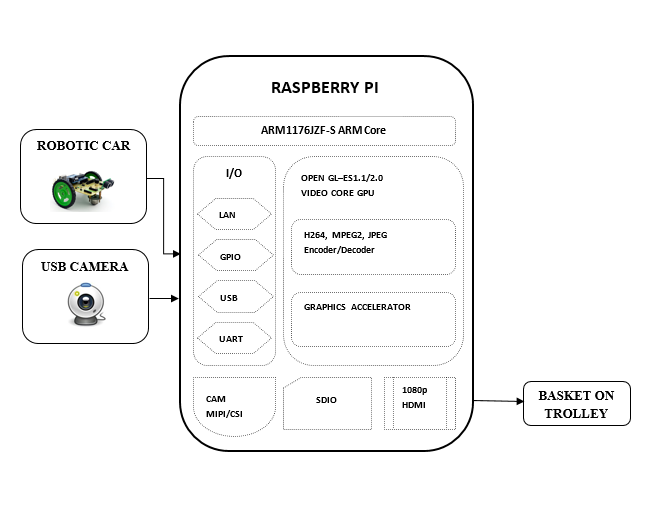 Raspberry Pi with the Camera system, which first analyzes the user by their dress color using Hue Saturation Value (HSV) with Open CV. Which follows the user until they reach the entrance and also which having obstacle avoidance technology using the Ultrasonic sensor to avoid a collision. So that trolley system becomes autonomous to become customer friendly.

Considering the changing trend in retail shopping, we conclude that the Intelligent Shopping Basket is most certainly a definite necessity for the Retail marketing industry to step up their portfolios, cope up with the advancement in technology and save time and manpower.