Self Driving car is the most trending technology which already implemented in Tesla cars, As initially, you can learn about the technology by using this system. For this, we are using OpenCV, Machine learning technology. This system contains Raspberry Pi as the core system, which having functionalities like, Traffic light detection, Vehicle detection, pedestrian detection, Road sign detection to make the car as autonomous. Every process is done using the Raspberry Pi with Python programming. 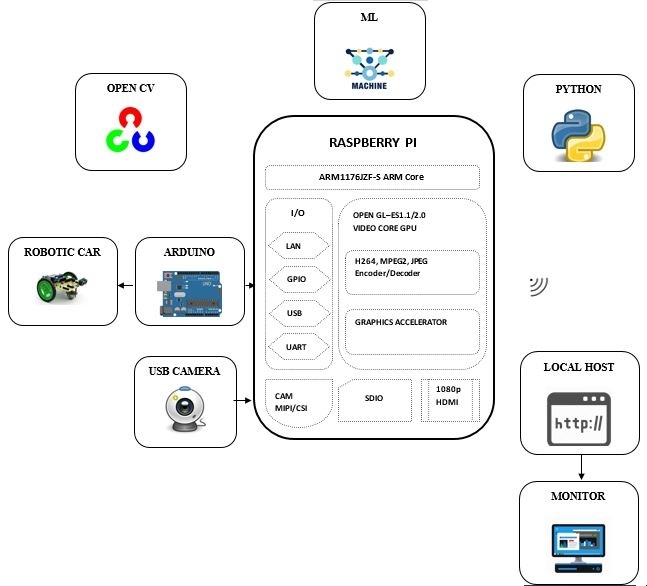 In the above Block diagram, For a self-driving camera, Camera is connected with the Raspberry Pi USB port, then the Raspberry Pi which is interfaced with the Car with 2 motors through the Driver IC (L293D). Based on the driving parameter, the signal is sent to Arduino to operate the Car. The monitor is connected as localhost, using remote desktop as the same network to view the video stream of the Car.

The car which has the core system as Raspberry Pi, which interfaced with the camera, will stream the video to the Monitor as localhost. Based on the detection like pedestrians, vehicle or road sign and signals, commands are sent to the Arduino serially to operate the car. Since Raspberry Pi is doing a process like a video streaming to the computer. So to operate the car, control commands are sent to the Arduino from the Raspberry Pi. So while running, the camera interfaced with the car, notices any of the detection parameters, if it notices any parameter like road sign it is reported in the display. The car will move accordingly to the parameter.

By measuring furthermore parameter like LIDAR values by interfacing LIDAR sensor, sensor fusions we can make this car as furthermore autonomous like for lane detection and following the Rules.