Basically it is difficult for blind people pass their day to day life with their disabilities. To make their stick smarter, we interfaced some system with their walking stick. In this system we interfaced some smart functions with their stick. Whenever the obstacle is detected on the way through ultrasonic sensor placed on the stick, Camera gets triggered to capture the object which is on the way. The captured image is sent to cloud to identify the type of the object and then it is intimated as voice command through speaker or via earphones connected with Raspberry pi. So that blind can able to identify the object in-front of them, if it is identified that is a human in their way, they can ask for any help. If there is a large obstacle like a car, they can be able to walk based on the object in-front of them. Additionally, by interfacing GPS with the system, with the help of google maps, the system will automatically navigate their way to home.

In the list of disabilities, blind people are facing more difficulties on their day to day life. Nowadays every technology becomes smarter, in the list of them, this technology makes walking stick smarter which has many applications such as walking stick indicator in case if they miss the stick through sound beeping, Navigating their way to home by redefining the users’ home through voice command using the Google map navigator and to know the places near to their location like shops.

In the existing system, there is only technology to detect the obstacle and to notify the blind by having some warning sound.

In this proposed system, while a blind person walks on the road by holding this walking stick, when there is an obstacle, it is being captured using a camera and that image is passed to object identifying cloud  and give warning about that object through ear pad. Additionally the system has an interface of RF receiver with the walking stick, RF transmitter is held by the Blind person, if they supposed to lose their stick or if it fell down, when they press the button1 in the transmitter, beep sound will come from the walking stick. so they can able to find their walking stick, if user presses the button2 then they can able to know the places near to them. Similarly, if they press button3 it will automatically read our current location and navigate them to their predefined home. 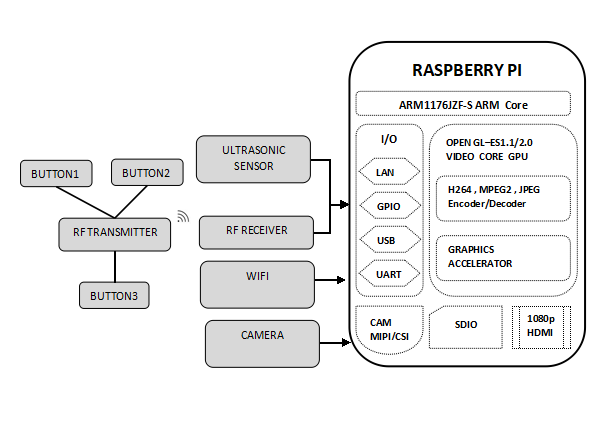 BUTTON 1 – To identify the stick

BUTTON 2 – To navigate him to home

BUTTON 3 – To know the places nearby

Raspberry pi is embedded with Walking stick at, which Ultrasonic sensor is interfaced with GPIO pins of Raspberry pi, at the same time the camera should be connected with raspberry pi where both should face on the same direction on the road. It should be connected with Network so that captured image can be processed for object detection to intimate which object is an obstacle at this time. RF transmitter is also connected with RPi. Each command is sent by pressing the button on the RF transmitter which is held by them.

Automation places vital role in every technology, this system can also be innovated further by giving more automation like doing every operation automatically by analyzing their day to day life. Instead of walking stick we can use the band as smart technology for the blind person assistant.