This paper presents the development of a smart navigation for blind people using Google App Maker where we will develop our own API for Blind and low-vision users. Google App maker additionally, provides tools for developers who want to build accessibility features into their apps. In this project we will be using Raspberry pi to which we will make smart stick for blink people which will be embedded with moisture and ultrasonic sensor to detect the real time hurdles while walking with the Google Maps cloud attached to the raspberry pi for perfect navigation for the low-vision or blind people. This will make a smart system which will be very useful for the blind people and also at the same time more accurate and safe. The blind people interact with the system in voice. The cloud platform communicate with the smart phone using 4G technology. The proposed system can provide more abundant surrounding information and more accurate navigation, and verify the practicability of the newly proposed system.

Safe navigation and detailed perception in unfamiliar environments are a challenging activity for the blind people. This paper proposes a cloud and vision-based navigation system for the blind. The goal of the system is not only to provide navigation, but also to make the blind people perceive the world in as much detail as possible and live like a normal person.

In the existing system, smart blind stick is used which is embedded with some sensors which will tell the atmospheric condition of the atmosphere but not work with the navigation of routes.

In this proposed system, both sensors and the Google Map API make the navigation smart and interactive with the low-vision and blind people through the voice. 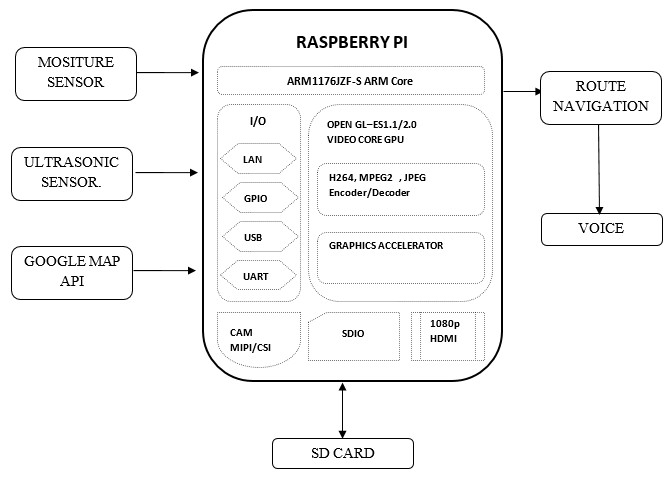 According to this system, the blind people interact with the system in voice. The cloud platform communicates with the smartphone through Wi-Fi or 4G mobile communication technology. For testing the system performance, two groups of tests have been conducted. One is perception and the other is navigation. Test results show that the proposed system can provide more abundant surrounding information and more accurate navigation, and verify the practicability.