Home automation is becoming more and more popular day by day due to its numerous advantages. This can be achieved by local networking or by remote control. This paper aims at designing a basic home automation application on Raspberry Pi through reading the subject of E-mail and the algorithm for the same has been developed in python environment which is the default programming environment provided by Raspberry Pi. Results show the efficient implementation of proposed algorithm for home automation. LEDs were used to indicate the switching action.

The Raspberry Pi is a credit card sized single computer or SoC uses ARM1176JZF-S core. SoC, or System on a Chip, is a method of placing all necessary electronics for running a computer on a single chip. Instead of having an individual chip for the CPU, GPU, USB controller, RAM everything is compressed down into one tidy package. Raspberry Pi needs an Operating system to start up. In the aim of cost reduction, the Raspberry Pi omits any on-board non-volatile memory used to store the boot loaders, Linux Kernels and file systems as seen in more traditional embedded systems. Rather, a SD/MMC card slot is provided for this purpose. After boot load, as per the application program Raspberry Pi will get execute.

In the existing system home automation is done by sending messages through mobile and devices were controlled by the user commands. 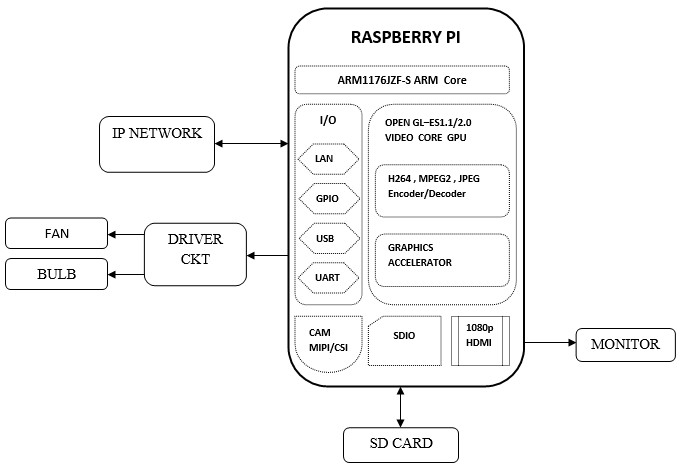 In  this block diagram the whole system is controlled by Arm11  processor  and  this  processor  is  implemented  on Raspberry  Pi  Board. So this board is connected with monitor, SD card and IP connected through LAN. Those all components are connected by USB adaptors.  The home devices are connected to raspberry pi. One powerful feature of the Raspberry Pi is the row of GPIO (general purpose input/output) pins along the edge of the board. At the simplest levels, they are the switches that can turn on or off (input) or that the Pi can turn on or off (output). Out of the 17 GPIO pins, 3 pins have been used to control three devices in this project which have been represented by 3 LEDs for testing the switching signal. For practical purposes a relay driver circuit and relays can be interfaced with Raspberry Pi and appliances, respectively, for their controlling.