This paper we propose a security patrolling robot that uses night vision camera for securing any premises. The robotic vehicle moves at particular intervals and is equipped with night vision camera and sound sensors. It uses a predefined line to follow its path while patrolling. It stops at particular points and moves to next points if sound is detected. The system uses IR based path following system for patrolling assigned area. It monitors each area to detect any intrusion using 360degree rotating HD camera. It has the ability to monitor sound in the premises. Any sound after company is closed and it starts moving towards the sound on its predefined path. It then scans the area using its camera to detect any human faces detected. It captures and starts transmitting the images of the situation immediately on sound or human face detection. Here we use IOT Local Area Network (LAN) for receiving transmitted images and displaying them to user with alert sounds. Thus we put forward a fully autonomous security robot that operates tirelessly and patrols large areas on its own to secure the facility.

The idea behind this is to secure the whole area. Any small sound results in the alert and robot automatically goes to the particular area and capture the image of that area and send it to the user. Raspberry Pi connected with the camera plays an important role in making an automatic robotic system.

In the existing system, robot has to control remotely where the person has to monitor the area using remote but manually controlling and the more Human more is required to implement this system.

In this proposed system, Raspberry pi is installed with the night vision camera which help the system to go for the automation and help to find the human or any problem detected using the sound sensor and according to the sound produced it automatically goes to that area and capture the image and send it to user using IOT technology. 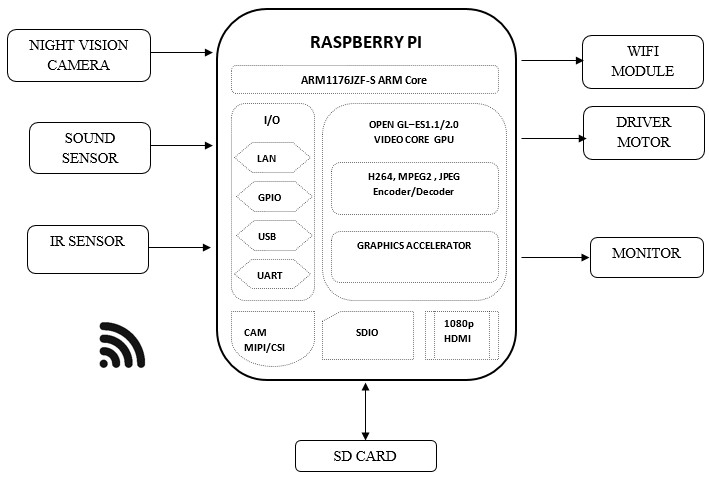 According to this system, whole area surveillance is done using the night vision camera and also automatic system when the sound is detected robot will follow the particular path and go to that area and capture the area and send using IOT. This system is an automatic smart way for night vision patrolling.