Target detection refers to the use of high spectral resolution remotely sensed images to map the locations of a target or feature (often a plant species of interest) with a particular spectral or spatial signature.

Robust small target detection of low signal-to-noise ratio (SNR) is important in infrared search and track applications for self-defense or attacks. Due to the complex background, current algorithms have some unsolved issues with false alarm rate. In order to reduce the false alarm rate, an infrared small target detection algorithm based on saliency detection and support vector machine was proposed. Firstly, we detect salient regions that may contain targets with phase spectrum Fourier transform (PFT) approach. Then, target recognition was performed in the salient regions. Experimental results show the proposed algorithm has ideal robustness and efficiency for real infrared small target detection applications.

Infrared (IR) small-target detection plays a critical role in large amounts of practical projects such as infrared warning and defense alertness, in which not only accuracy is needed but also robustness is required . Various algorithms have been developed in the past few decades . Conventional small target detection methods such as top-hat filter, max-mean/max-median filter  and high-pass filters based on  support vector machine (SVM)  are widely used to reduce the background clutters. In recent years, a series of simple and fast algorithm based on Fourier transform was proposed, such as spectral residual (SR) , phase spectrum of Fourier transform (PFT) , hyper complex Fourier transform (HFT) . With regards to small target detection, frequency domain method is quite different from other methods. It transforms the airspace information to the frequency domain, defines significant target and tests in the frequency domain. While, spectral residual (SR) approach does not rely on the parameters. It calculates the difference between the original signal and a smooth one in the log amplitude spectrum, and then makes up a saliency map by transforming SR to spatial domain. PFT approach detects small targets from the reconstruction that is calculated only by the phase spectrum of the input signal. It omits the computation of SR in the amplitude spectrum, which saves about 1/3 computational cost.

HVS divides the scene into small patches and select important information through visual attention selection mechanism to make it easy to understand and analyze. On the other hand, as a component of low-level artificial vision processing, it facilitates subsequent procedures by reducing computational cost, which is a key consideration in real-time applications. Based on the above knowledge, we propose a framework consisting of two stages inspired by HVS. In pre detection stage, a saliency map (SM) is obtained and the most salient region is picked up to improve detection speed. In detection stage, a support vector machines (SVM) classifier is used to get the target quickly. Due to the two layers structure, the algorithm computational complexity becomes the prime concern. For the simplicity and high processing speed, saliency detection methods in the frequency domain are chosen. For instance, PFT is an advanced and effective method in saliency detection and expounds the real significance of frequency domain significant. Details will be described. Candidate targets can be got through PFT followed by threshold operation. 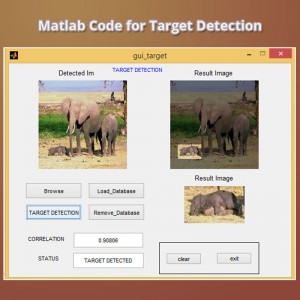 In this paper, a robust IR small target detection algorithm based on HVS has been proposed. First we propose features of each database image and every input object image. Then SVM classifier separates targets from background clutters. Experimental results show that the proposed algorithm is robust to resist pseudo targets and can achieve a high detection rate in less than 0.02 s with a fast calculation speed. This algorithm can be either directly used in single-frame target detection or used as a foundation module in sequential target tracking for real-time applications.