A robust structure-adaptive hybrid vector filter is proposed for digital color image restoration in this paper. At each pixel location, the image vector (i.e., pixel) is first classified into several different signal activity categories by applying modified quad tree decomposition to luminance component (image) of the input color image. A weight-adaptive vector filtering operation with an optimal window is then activated to achieve the best tradeoff between noise suppression and detail preservation. Through extensive simulation experiments conducted using a wide range of test color images, the filter has demonstrated superior performance to that of a number of well known benchmark techniques, in terms of both standard objective measurements and perceived image quality, in suppressing several distinct types of noise commonly considered in color image restoration, including Gaussian noise, impulse noise, and mixed noise.

Various nonlinear, fixed-neighborhood techniques based on local statistics have been proposed in the literature for filtering noise in color images. We present adaptive vector filtering (AVF) techniques for noise removal in color images. The main idea is to find for each pixel (called the “seed” when being processed) a variable-shaped, variable-sized neighborhood that contains only pixels that are similar to the seed. Then, statistics computed within the adaptive neighborhood are used to derive the filter output. Results of the AVF techniques are compared with those given by a few multivariate fixed-neighborhood filters: the double-window modified trimmed-mean filter, the generalized vector directional filter – double-window – α-trimmed mean filter, the adaptive hybrid multivariate filter, and the adaptive nonparametric filter with Gaussian kernel. It is shown that the AVF techniques provide better visual results, effectively suppressing noise while not blurring edges; the results are also better in terms of objective measures (such as normalized mean-squared error and normalized color difference) than the results of the other methods

A multichannel (vector-valued, multicomponent, or multispectral) image is characterized at each point (pixel) by a vector of relative spectral intensities. In the classical case of color images, each pixel is a three-component vector, with the components being the relative amounts of red, green, and blue (RGB) that compose the local color. Other representations of color include the HSV (hue, saturation, value) and the CIE (Commission Internationale de l’Eclairage) standard representationsFor this reason, separate processing of the component images using common techniques meant for gray-scale images is not appropriate. In most color image filtering algorithms, the observed noise is modeled as additive, white Gaussian noise that is independent of the signal. However, impulsive noise, modeled as sparse “spikes” that appear in the images, is likely to corrupt color images. Hence, in many papers in the literature, the images are assumed to be corrupted by a combination of these two types of noise. Although simple to implement, this type of filtering seems to have lost its appeal, mainly due to its global and nonadaptive nature. Various nonlinear filtering techniques have been proposed to process color images . The aim of most of these techniques is to preserve the edges in the image while reducing the noise

The proposed filters use fuzzy transformations and Multi thresholding process of the angles among the different vectors to adapt to local data in the image. The principle behind the new filters is explained and comparisons with other popular nonlinear filters are provided. The specific case of color image processing is studied as an important example of multichannel image processing. Simulation results indicate that the new filters offer some flexibility and have excellent performance 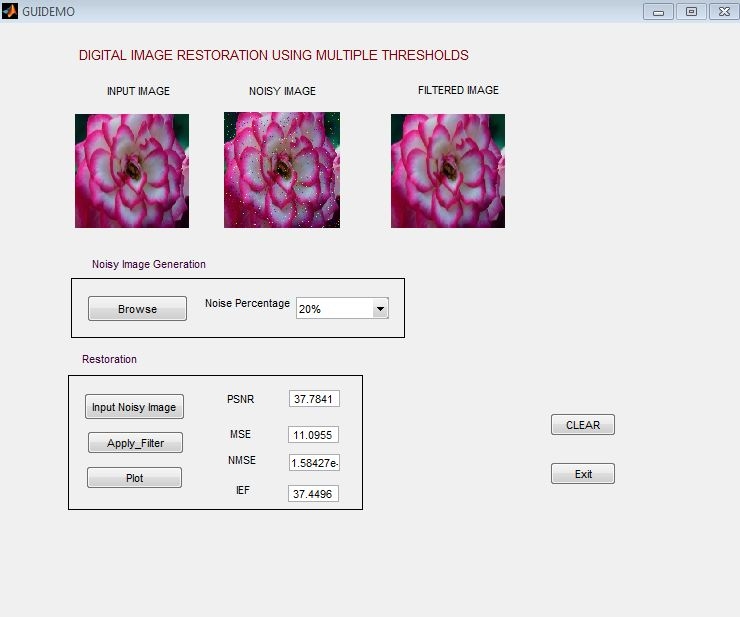 In this paper, the adaptive filtering approach was extended to the case of color (multichannel) images. Procedures for region growing and estimation of uncorrupted pixels using statistics computed within adaptive regions were developed for the vectorial case. It was shown that results obtained by the adaptive-neighborhood approach are better, both in objective and subjective terms, than the results obtained using fixed filters. The adaptive Vector filtering approach may be easily extended to the case of multispectral images, which makes it a powerful tool for vectorial image processing.