An enhancement of data protection system for secret communication using reserve room in encrypted images based on texture analysis with lifting wavelet is proposed here. The wavelet will decompose the image into four frequency sub bands namely LL, LH, HL and HH. These coefficients are then utilized in the encoder for removing the redundancies. The Selective embedding is utilized in this method to determine host signal samples suitable for data hiding. This approach uses the Least Significant Bits (LSB) insertion to hide data within encrypted image data. The binary representation of the hidden data is used to overwrite the LSB of each byte within the encrypted image randomly .The hidden data will be used to enable the receiver to reconstruct the same secret transformation table after extracting it and hence the original image can be reproduced by the inverse of the transformation and encryption processes. We proposed the encrypting user’s data using RC7 Algorithm with a Secret Key, Which is embedded in a Image using LSB based image steganography techniques. The simulation results indicate that the framework can be successfully utilized in Image data hiding applications.

All modern steganography algorithms for digital images are content adaptive in the sense that they restrict the embedding modifications to complex regions of the cover which are difficult to model for the steganalyst. The probabilities with which the individual cover elements are modified (the selection channel) are determined jointly by the size of the embedded payload and content complexity. The most accurate detection of content-adaptive steganography is currently achieved with detectors built as classifiers trained on cover and stego features that incorporate the knowledge of the selection channel. While selection-channel-aware features have been proposed for detection of spatial domain steganography, an equivalent for the JPEG domain does not exist. Since modern steganography algorithms for Audio  are currently best detected with features formed by histograms of noise residuals split by their JPEG phase, we use such feature sets as a starting point in this paper and extend their design to incorporate the knowledge of the selection channel. This is achieved by accumulating in the histograms a quantity that bounds the expected absolute distortion of the residual. The proposed features can be computed efficiently and provide a substantial detection gain across all tested algorithms especially for small payloads.

Discrete Cosine transformation Discrete Cosine Transform (DCT) is applied to the given cover image to get the DCT coefficients. Direct bit replacement Process  is for cryptography

The Image Steganography technique is based on,Lifting Wavelet Transform ( LWT) and Least Significant Bits (LSBs) substitution. In order to increase the security level a simple encryption with chaotic key has been proposed. The proposed system has a high sensitivity in choosing keys because a small change in CKG causes a new secret key for transmitting. Speech steganography algorithm that based on (LWT) can satisfy full recovery for the embedded secret messages in the receiver side. The lifting scheme of DWT is an algorithm to implement wavelet transforms in an efficient way. It is also a wonderful method to create so-called second-generation wavelets. The lifting wavelet transform is a multi-resolution representation that means the signal divided to two parts the first called approximation sub-band and second part named detail sub-band these parts are obtained by applying corresponding wavelet filters (high-pass filter, low-pass filter). Generally lifting scheme consists of three steps, Splitting, production, and update with the Chaos crypto system and RC7 Encryption for secret data. 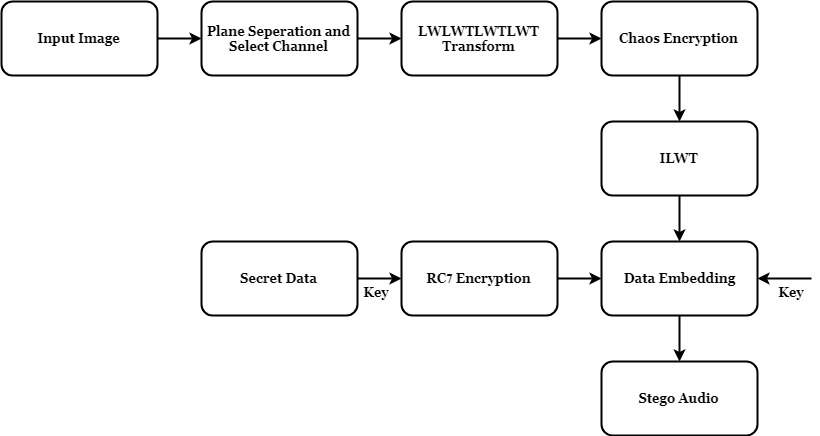 A new algorithm hiding technique is proposed in this paper using chaotic logistic map. This algorithm is simple, fast, and efficient and has high imperceptivity. The chaotic logistic map has been used in encrypting and embedding with DCT which increases the security and imperceptivity because the sensitivity of logistic map to initial condition leads to generate different sequence with different initial value. As seen in experimental results using DCT in embedding will not damage cover images which reflect by value of correlation that equal 1, it means high identical between the cover before and after embedding.