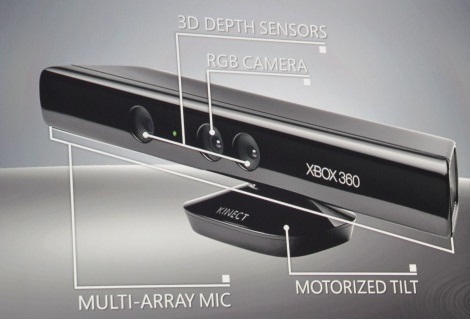 The Kinect sensor is a flat black box that sits on a small platform, placed on a table or shelf near the television you’re using with your Xbox 360. Newer Xbox 360s have a Kinect port from which the device can draw power, but the Kinect sensor comes with a power supply at no additional charge for users of older Xbox 360 models. For a video game to use the features of the hardware, it must also use the proprietary layer of Kinect software that enables body and voice recognition from the Kinect sensor.

A further look at the technical specifications for Kinect reveal that both the video and depth sensor cameras have a 640 x 480-pixel resolution and run at 30 FPS (frames per second). The specifications also suggest that you should allow about 6 feet (1.8 meters) of play space between you and the Kinect sensor, though this could vary depending on where you put the sensor.

The Kinect hardware, though, would be nothing without the breakthrough software that makes use of the data it gathers. Leap forward to the next page to read about the “brain” behind the camera lens.

The Movement tracking itself is using a IR VGA camera and a laser that detect the field of play using depth field technology, where it can distinguish our body from a non-moving furniture. Once Kinect detected our body, it will transform the data into a skeleton with moving joints and preloaded with up to 200 common poses as a substitution when a gasp (e.g. out of focus) between the camera and your body appear.

How to Interface I2C-RTC with PIC16F877A PIC Development Board

How to Interface External Interrupts with LPC2148 arm7 starter board