Irrigation is a very important factor when it comes to industrial farming. Water is an expensive commodity when it comes to most of the places in the world. This paper proposes and implements a prototype automatic irrigation system with IoT. In this case, sensors are used to determine whether it is time to water the field or not by measuring different parameters. There are two nodes in this system one master node and one slave node. MSP432 is used as master node controller and MSP430 is used as a slave node controller. Master will coordinate and receive data from the slave node, the slave node is used for the sensing part so it is placed in the field. The slave will be given two sensor modules moisture sensor and DHT11 module. DHT11 can measure the temperature and humidity of the field. All these data are transmitted to the master using a ZigBee module. Master will receive all data and received data is uploaded to thingspeak for remote analysis. To connect masters MSP432 controller to the internet an ESP8266 WiFi module is used. Only the person who knows account information can log in to the account to see the output.

Considering the global temperature hikes in the past decade water has become a very precious commodity for the lifeline of farming. Every other process in farming has been automated according to the need of the process. Irrigation systems in most of the farms across the world still follow the same conventional periodic watering methods. This leads to inefficient use of water resources. This system proposed here rectifies this problem through analysis of the field based on different parameters such as temperature, humidity and soil moisture content. After analysis water is irrigated in a systematic way to avoid excess usage when not needed. In this system, the remote analysis is also possible through IoT. 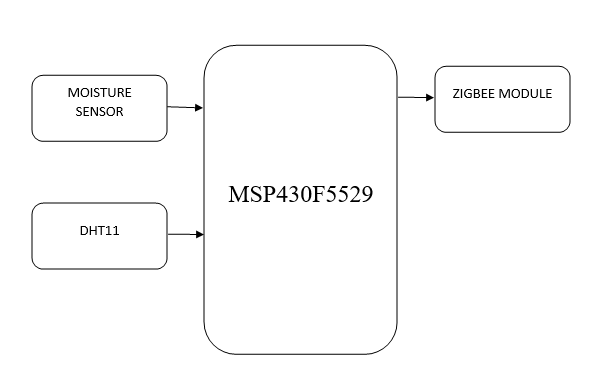 Importance of controlled irrigations led to the idea of this project. It is very important to have such a system that will irrigate water according to the analysis made on the soil. The system here implemented has been tested and proved to be very helpful in determining the amount of water to different parts of the farm.