In this project, we are used three types of gas sensor to find emission in the vehicle.

An increase in automobile vehicle ends up in a rise in air pollution since automobiles area unit the main source of environmental pollution. The smoke emitted from the vehicle consists of gases like nitrogen oxides (NO), carbon monoxide gas (CO), and hydrocarbon (HC). Just about one-half of the nitrogen oxide gases, carbon monoxide gas and fourth of hydrocarbon gases in the environment area unit emitted from automobile vehicles, which ends up in warming. Due to poor vehicle maintenance and ignition defect. The gases emitted from the exhaust may increase. So as to scale back environmental pollution and to extend vehicle life, we will use this method. Once the rate of gases emitted from the vehicle exceeds the starting stage limit set by the government, our system can alert the user through liquid crystal display. Using IOT, the emission level is additionally displayed and holds on within the info of a vehicle owner. Once the vehicle owner ignores it, the report can send to the transport office with entire details. The whole system is controlled by Node MCU microcontroller

Environmental pollution in India turns out to be a serious issue in the 21st century. The main source of pollution in India is due to automobile vehicles. Government of India made many regulations to control environmental pollution caused due to vehicle emission, but most of them turn to be unsuccessful. The government of India instituted a standard called Bharat stage emission standard (BSES) to regulate air pollution from motor vehicles. BS- 4 standards are following in India since April 2010. To speed up the green initiative, the government made an order to move from BS-4 to BS-6 in 2020. The Indian pollution control board has made FC (Fitness certificate) and PUC (Pollution under control certificate) is compulsory for commercial and public vehicles to control air pollution. Carbon monoxide, hydrocarbon, and nitrogen oxides are the gases emitted from the exhaust. The CO in the atmosphere reduces the capability of blood in carrying oxygen; hydrocarbon in the atmosphere affects heart, brain, kidney and bone marrow. NO affects the lung and causes a respiratory problem. In the era of urbanization due to the rapid increase in an automobile vehicle, it is difficult to inspect all the vehicles. It requires a lot of man force to inspect all those vehicles. In order to monitor all the vehicles easily, we develop a system called IoT based emission monitoring system, through which we can able monitor all the vehicles easily. The IOT plays a vital role in this project, the sensors placed at the exhaust monitors the level of different gases, with the help of IOT the value is updated to the cloud. This makes each the vehicle owner and transport workplace to watch the vehicle simply. 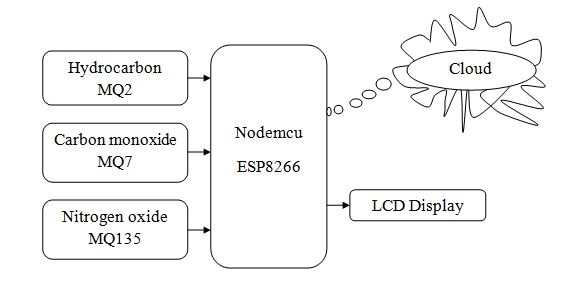 The environmental pollution caused due to the emission of gases like carbon monoxide, hydrocarbon, and nitrogen oxide emitted from vehicle exhaust need to be reduced in order to save our environment. The proposed system provides the best solution to monitor the gases emitted from the vehicle exhaust to increase the life of the vehicle and to reduce environmental pollution. The proposed system is low cost and easy to maintain. In future GPS can be added to send the details to the regional transport office and to calculate the number of gases emitted from vehicles in a particular region.