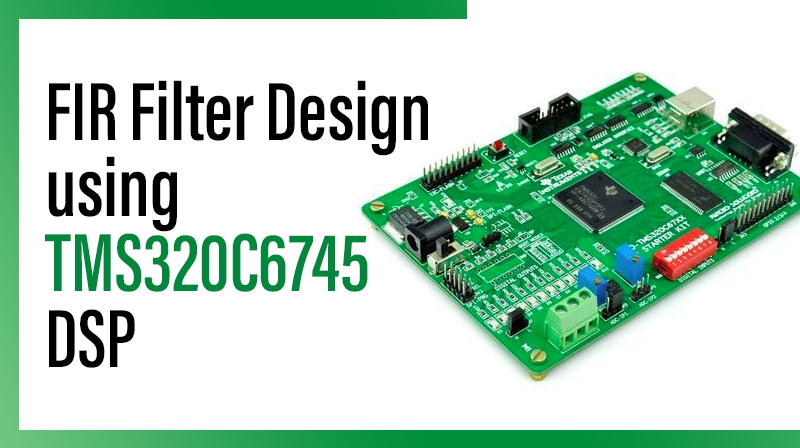 The TMS320C6745 DSP Development Board is specially designed for developers in dsp field as well as beginners. The kit is designed in such way that all the possible features of the DSP will be easily used by everyone.

An analog-to-digital converter (abbreviated ADC, A/D or A to D) is a device that converts a continuous quantity to a discrete time digital representation. An ADC may also provide an isolated measurement. The reverse operation is performed by a digital-to-analog converter (DAC).

A Digital-to-Analog converter (abbreviated DAC, D/A or D to A) is a device that converts a digital value to a continuous analog signal representation. The DAC may also provide an isolated measurement. The reverse operation is performed by an analog to digital converter (ADC).

Typically, a DAC is an electronic device that converts a digital number to an analog voltage proportional to the resolution of bit.

The ADC and DAC are SPI Bus based which is a serial bus. So the number of pins in IC is very low. Total of four lines are required to interface ADC & DAC it with TMS320C6745.

As you know in synchronous serial communication there is a clock line (SCK in case of SPI) which synchronizes the transfer.

The clock is always controlled by the MASTER. In our case the TMS320C6745 is the MASTER and the MCP3202 & MCP4921 is a slave on the bus. SPI is full duplex that means data can be sent and received simultaneously.

The analog voltage output produced by a D/A Converte

This is in contrast to infinite impulse response (IIR) filters, which may have internal feedback and may continue to respond indefinitely (usually decaying).

The impulse response of an Nth-order discrete-time FIR filter (i.e., with a Kronecker delta impulse input) lasts for N + 1 samples, and then settles to zero.

The output y of a linear time invariant system is determined by convolving its input signal x with its impulse response b.

For a discrete time FIR filter, the output is a weighted sum of the current and a finite number of previous values of the input. The operation is described by the following equation, which defines the output sequence y[n] in terms of its input sequence x[n]:

biare the filter coefficients, also known as tap weights, that make up the impulse response,

N is the filter order; an th-order filter has terms on the right-hand side.

The x[n-i] in these terms are commonly referred to as taps, based on the structure of a tapped delay line that in many implementations or block diagrams provides the delayed inputs to the multiplication operations. One may speak of a 5th order/6-tap filter, for instance.

Note: Practical & Coding explanations are given in this below blog,