Computer Vision and Internet of thing (IOT) is the emerging technologies now a days. To reduce the man power for security aspects in this project a Face Tracking system has been implemented using a single board computer i.e. Raspberry Pi 3 which will act as the CPU in which we will do the coding part using Python and a module named Open Source Computer Vision (OpenCV). A USB camera is attached to the raspberry pi which will be used for face tracking whenever the person come before the camera it will track the face of the person, the main advantage of this is it can track multiple faces at the same time in the single frame. This system make our work easier to track a face where we don’t have to manually track that. OpenCV with python make this system more accurate and easy to track any face. When a person face is tracked in the camera it will give the alert to maintain security especially in the areas where persons are not allowed. The alert is given using the Twilio API which will automatically send the message to the owner when even a face is tracked and detected.

This system make our work easy to track a person face using the OpenCV with python using a USB camera attached to the raspberry pi. Which will automatically track the face whenever the person is in the frame. Also its advantage is that it can go with more faces at the same time.

In the existing system, the face is tracked by using the captured videos and observing the video continuously to know the status, and to track the person. More time taking part no automation. 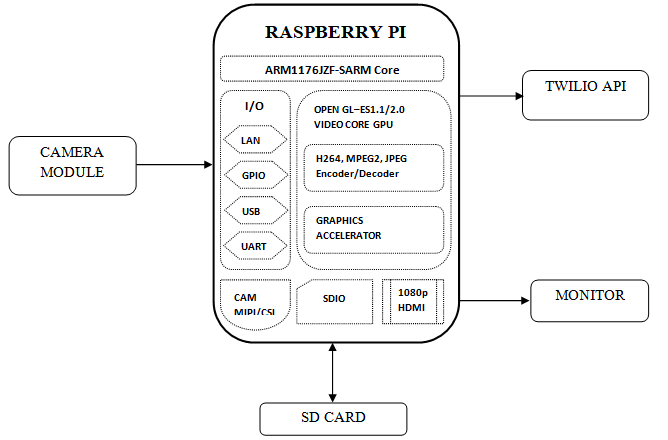 In this system face tracking is made easier by using OpenCV with python, which will track the person face and also intimate using the SMS API with tracking the person in real time surveillance. At the same time more than two persons are also tracked using this system.