From this project you will learn to use computer vision for detecting eyeball and tracking eyeball movement for cursor control.

At present situation, paralyzed peoples need a guidance to do any work. One person should be there with that person to take care of him. By using the eyeball tracking mechanism, we can fix the centroid on the eye based on the centroid we need to track that paralyzed person’s eye this eyeball track mechanism involves many applications like home automation by using python GUI robotic Control and virtual keyboard application.

In our proposed system the cursor movement of the computer is controlled by eye movement using Open CV. The system comprises of Raspberry heart of this system which is interfaced with USB webcam and Monitoring Unit. The camera detects the Eyeball movement which can be processed in OpenCV. For operating mouse pointers we can also use thee PyautoGUI library for cursor movement 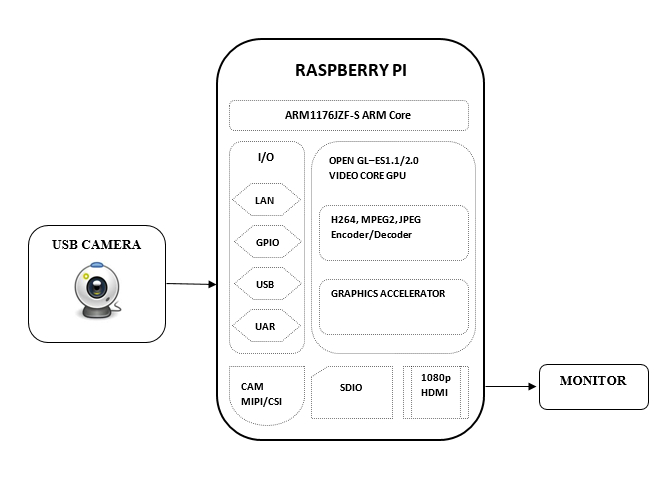 Here, in this block diagram the whole system is controlled by the Arm11 processor and this processor is implemented on Raspberry Pi Board. So this board is connected with a monitor, camera, and SD card. Those all components are connected by USB adaptors.  Raspberry Pi is the key element in processing module which keeps on monitor’s eye movement by interfacing USB camera. The camera is capturing the image of eye movement. USB Cameras ideal for many imaging applications.  USB Camera will be an interface with raspberry pi. Raspberry Pi will be using SD card, then the install Raspbian OS and open CV on the raspberry pi. Fist image will be captured by USB Camera. Focus on the eye in the image and detect the Centre position of the pupil by open CV code.  Take the center position value of pupil as a reference, and then the next the different value of X, Y coordinates will be set for a particular command.

In this research, the experimental results provide objective eye-tracking evidence that confirms the hypotheses made based on the findings of the existing research: Most students recognize beacons and pay more attention to these areas when debugging. Only significant statistical results have been reported in the conclusions, guaranteeing the conclusion validity. Previous research has revealed a relationship between working memory capacity and cognitive activities related to debugging with regard to mental arithmetic, short-term memory, logical thinking, and problem-solving. Thus, the eyeball movement tracking is applied to physically challenged peoples to obtain various results