Human Cancer is one of the most dangerous disease which is mainly caused by genetic instability of multiple molecular alterations. Among many forms of human cancer, skin cancer is the most common one. To identify skin cancer at an early stage we will study and analyze them through various techniques named as segmentation and feature extraction. Here, we focus malignant melanoma skin cancer, (due to the high concentration of Melanoma- Hier we offer our skin, in the dermis layer of the skin) detection. In this, We used our ABCD rule dermoscopy technology for malignant melanoma skin cancer detection. In this system different step for melanoma skin lesion characterization i.e, first the Image Acquisition Technique, pre-processing, segmentation, define feature for skin Feature Selection determines lesion characterization, classification methods. In the Feature extraction by digital image processing method includes, symmetry detection, Border Detection, color, and diameter detection and also we used LBP for extract the texture based features. Here we proposed the Back Propagation Neural Network to classify the benign or malignant stage.

K-means is one of the simplest unsupervised learning algorithms that solve the well known clustering problem. The procedure follows a simple and easy way to classify a given data set through a certain number of clusters (assume k clusters) fixed a priori. The main idea is to define k centroids, one for each cluster. These centroids shoud be placed in a cunning way because of different location causes different result. So, the better choice is to place them as much as possible far away from each other. The next step is to take each point belonging to a given data set and associate it to the nearest centroid. When no point is pending, the first step is completed and an early groupage is done. At this point we need to re-calculate k new centroids as bary centers of the clusters resulting from the previous step. After we have these k new centroids, a new binding has to be done between the same data set points and the nearest new centroid. A loop has been generated. As a result of this loop we may notice that the k centroids change their location step by step until no more changes are done. In other words centroids do not move any more. Finally, this algorithm aims at minimizing an objective function, in this case a squared error function. 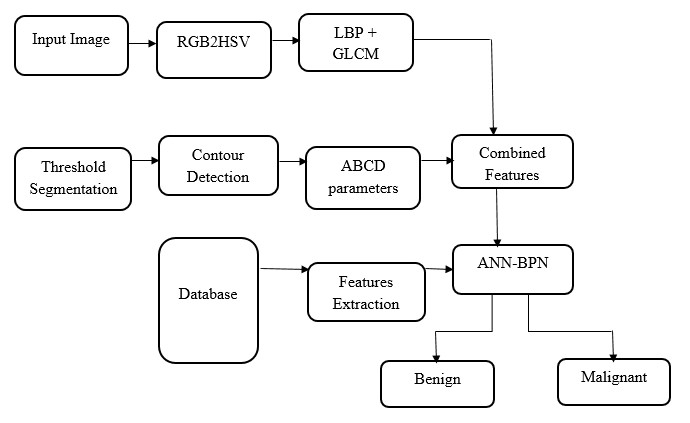 In this way, each thresholded pixel has one of the three values. Neighboring pixels are combined after thresholding into a ternary pattern. Computing a histogram of these ternary values will result in a large range, so the ternary pattern is split into two binary patterns. Histograms are concatenated to generate a descriptor double the size of LBP.

This paper proposes a navel method for extraction of features using Local Ternary Pattern (LTP) and signed bit multiplication, which uses central pixel for feature computation. The extracted features are main component of the initial set of learning images (training set).Once the features of test images are extracted, the image is classified by comparing its feature vector with other train vectors in database using ANN classifier

Neural networks are predictive models loosely based on the action of biological neurons.

The selection of the name “neural network” was one of the great PR successes of the Twentieth Century. It certainly sounds more exciting than a technical description such as “A network of weighted, additive values with nonlinear transfer functions”. However, despite the name, neural networks are far from “thinking machines” or “artificial Brains”. A typical artifical neural network might have a hundred neurons. In comparison, the human nervous system is believed to have about 3×1010 neurons. We are still light years from “Data”.