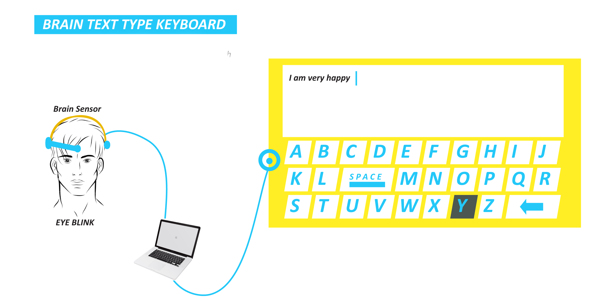 People who have severe movement disorders like Amyotrophic Lateral Sclerosis (ALS) or Locked in Syndrome, is a condition where a patient is awake and aware of its surrounding but unable to communicate or perform any action due to paralysis of almost every voluntary muscles in the body (with the exception of eye movements and blinking). The people who are suffering from severe Cerebral Palsy disorder are not able to speak or not understandable enough so they could not communicate and interact with others.

These people also have severe movement disorder.Imagine these patients having a fully functional brain trapped within a non-functioning body. The brain of the patient would be fully conscious and aware of its surroundings, it could think and process stimuli, but unable to translate thought into action. This is caused by a gradual degeneration of the nerve cells in the central nervous system that controls voluntary muscle movement.

Abhinav have developed a Brain Keyboard Application. He used the processing platform and Thinkgear library to develop a Brain Keyboard application. This is a low cost solution which can serve as a big help in communication and interaction for people who have severe movement disorders like Amyotrophic Lateral Sclerosis (ALS) or Locked in Syndromes,cerebralpalsy etc.

The application has 26 alphabetical keys with a space and a delete key. Here, a square selection box scans all the keys one by one in a sequence. There is a time delay of about 100ms to move the square selection box from one key to another key. The application takes the input when user blinks his eye. The eye blinks triggers the current selected key (as shown in the picture) and the letter gets print on the text box

Pantech Proudly Announced to be the IoT Partner for the VIZAG STARTUP SUMMIT 2.0