There are lot industries are trying to enhancing the Human intelligence by analyzing the Brain using the study of BCI – Brain computer interface. In this project one of the low cost EEG Measuring device Brainsense is used. And as option it also supports Neurosky moindwave mobile. By using this device Miniature wheelchair gets controlled, which will be mainly helpful for the paralyzed people to control their wheel chair since they cannot move physically.

The brain signals used here are Spontaneous EEG signals. These signals are associated with various aspects of brain function related to mental tasks carried out by the subject at his/her own will. The mental tasks include attention, eye blinks and eye movement for forward, reverse and stop actions respectively.

In this application a headgear is used for signal acquisition instead of the electrode cap. The headgear or the brainwave starter kit makes use of dry sensors which does not require application of a conductive gel between the sensors and the scalp. Also this device is much lighter and convenient for usage when compared to the conventional EEG sensors as it requires only one electrode for sensing. Another advantage of using this kit is that the data or brain signals are transmitted to the signal processing unit via Bluetooth connection which was not possible with the conventional signal acquisition methods.

The signal processing unit used in this application is a laptop/PC. The brain signals are transmitted from the headgear via Bluetooth to MATLAB platform in the laptop. The digitized value is then passed on to suitable microcontroller through USB port for further mapping of brain signal values to control signals of the motors.

An H bridge is an electronic circuit that enables a voltage to be applied across a load in either direction. These circuits are often used in robotics and other applications to allow DC motors to run forward or backwards. H bridges are available as integrated circuits. They can be built using discrete components.

Two motors of 60rpm each are used to form a wheelchair prototype. The frame is constructed using aluminium sheets. The control signals from the H-bridge circuit are sent to the motors. Depending on the action performed, the control signals will cause the motor to run in either in clockwise, anticlockwise direction or stop. 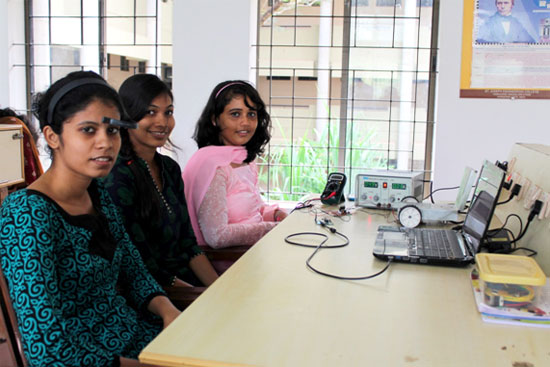 Initially Bluetooth connection is established between the headset and the signal processing unit (PC/Laptop). Once the headset is turned on, depending on the requirements of the motor movements, actions are performed. The brain signals are now extracted using Brainwave kit and converted to digital values and transmitted to signal processing unit via Bluetooth. These values are then processed in MATLAB and mapped into control signals of required amplitude using Arduino (ATMega8) and are then used to activate the motors of the wheelchair prototype.

When different subjects performed the same actions, the signal values obtained were within the same range but the delay varied from person to person. It was found that, this delay period could be reduced by training the headgear for that person.