In this method, we used Bluetooth to control the robot car with the help of Arduino Uno through an android application.

Nowadays we can see that things which were previously controlled manually are automated using machines and electronic remote controls. The main objective of this paper is to create an Android application which can be used to control the robot using wireless technology. Nowadays android is the most popular operating system used for smart devices. Smart devices which are using the Android platform are also becoming more popular these days because of its smart and easy to use touch interface. Also hardware technology utilized in smart phones is improving significantly day by day. Hence, we can say that using such a powerful and generalized platform of the Android smart phones to control the robotic or any other system will be the great advantage for industrial and other general purpose use. The wheeled robot is used in this paper will be able to connect with an Android smart phones using HC05 Bluetooth module. The  system is implemented in the robot using Arduino controller will provide us the constant feedback of the current status of performance of the robot. By using that feedback from the system errors in the system will be reduced and consistency of the performance of the system will be maintained. 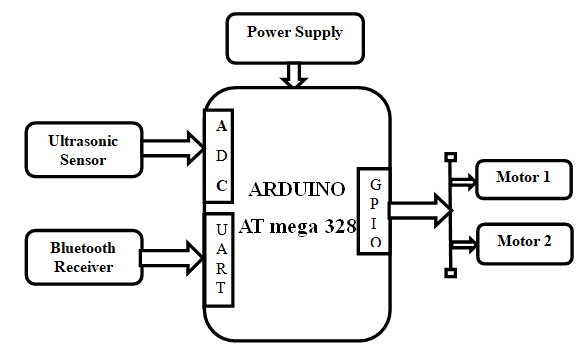 Robot will receive the data from android device. This data will be received by Bluetooth module first then it will forward the data to ATmega-16 micro-controller using UART. Microcontroller will process the data and output of this will be movement of the robot according to the input given by user.

[1] Design of a Bluetooth Enabled Android Application for a Microcontroller Driven Robot by Vito M. Guardi,(May 2014).

[4] Smart phone based robotic control for surveillance applications By M.Selvam,(IJRET 2014)