To determine the time constant and transfer function of first order process.

☞Give the square wave (step input) of around 30 Hz and amplitude of one VP-P to the process input points as shown in figure.

☞Observe the input and output waveforms on the CRO / Storage Oscilloscope

The system considered in experiment- had one major disadvantage, namely that there is considerable deviation present at all times. As deviation should operate the system, this implies that sensitivity is too low. In Process control this sensitivity is defined in terms of the proportional band.

☞Apply a square wave signal of 2VPP at around 30 Hz.

☞Alternatively display in the oscilloscope the set value disturbance point and measured value from the point PV.

☞Repeat all the above steps with the percentage proportional band 50% and 40%.

To study the time response of P + I controller.

The proportional control to maintain a stable system the gain level is such that the system is insensitive to deviation below the certain level. In an ideal system the measured value and the set value should be the same under steady state condition the deviation should be zero.

What is required is an alternative signal to be fed into the main amplifier of sufficient size to provide an output if a steady state deviation exists viz to reduce the offset to zero. Such a signal can be provided by an integrator which gives a constantly increasing output for a steady value input. Such an arrangement is known as proportional + Integral Controller and should reduce any steady state deviation to zero.

☞Adjust the proportional band control until the system settles with 2 to 3 overshoots.

☞Now connect the integral section as shown in figure

☞Slowly reduce the integral action time until the deviation falls to zero.

Thus the time response of P + I controller was studied. 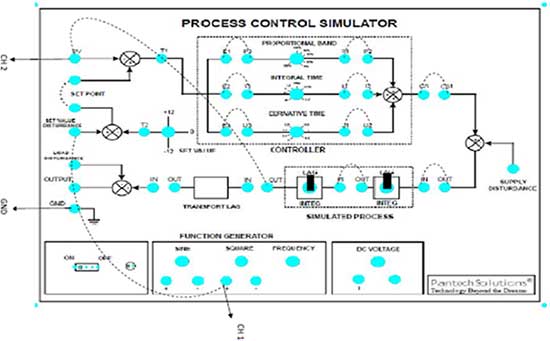 To study the response of P + I + D Controller in a process.

As seen in experiment the integral control improves the performance of the control system in some respects, i.e it reduces the steady state deviation, but has the disadvantage of slowing down the overall response time.

If a System is required to follow a sudden change in set value this would give rise to a rapid change in the deviation. Although this deviation change is rapid the system response rather slowly, So if at this time the controller output can be boosted, the speed of system response will be improved.

If the deviation is differentiated, i.e rate of change measured, and a signal produced proportional to this and then added to the signals from the proportional and integrator sections, some improvement may result. Such an arrangement is known as three term controller or PID controller

☞Apply a square wave of 2VP-P at around 50Hz.

☞Now patch E2,I3 and I1,I2and adjust the integral time until the steady state deviation is zero

☞Now note down the number of overshoots before the system settles.

☞Now connect E3, D3 and D1, D2 and slowly increase the derivative time and note down the effect of this system response.

Thus the response of P + I + D Controller in a process was studied.