View cart “Low-Cost Speaker And Language Recognition Systems Running On A Raspberry Pi” has been added to your cart. 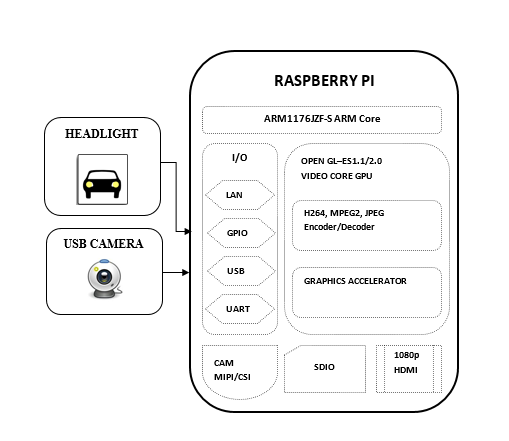 In the above Block diagram USB camera is connected to the car system that is on Raspberry Pi, then as for the car Headlight we used light bulbs as the prototype of the headlight to the GPIO pins of the Raspberry Pi

Car is turned into autonomous which will follow the road and avoiding colliding with other cars using sensors, but in the Night-time car can be identified by only the light which is projected by other cars, so by identifying the light projected by the other cars, our lighting system can become adaptive to reduce the light brightness which causing the vision bleach occurs to the drivers who coming in front of us. And also to identify the cars at night time. So that this simple one of the concept will help the car to be autonomous at a certain part. The video already streamed through the camera, which gets processed to convert into the gray image and by finding the pixel count to recognize the light strength.