A Lane Detection Algorithm Based On Reliable Lane Markings

An effective local feature extraction algorithm for lane detection is proposed in this paper. First, a lane region of interest (ROI) is determined by the location of road surface appeared in an image. Then, the light intensity and width of lane markings are taken as the local feature. A local threshold segmentation algorithm is utilized to extract lane-marking candidates followed by a morphological operation to obtain the accurate lane. An edge refining procedure is used to eliminate the interference and reduce computational cost. Finally, the lane marking is detected using Hough transform with some subsidiary conditions. With the proposed method, the lane can be accurately detected in conditions of fluctuating and poor illumination, as well as the interference from reflected light can be avoided effectively. The experimental results demonstrate the efficiency of the proposed method.

Lane detection is a process that is used to locate the lane markers on the road .With the help of this lane markers presents these locations to an intelligent system. This system decreases the road accidents and also helps to improves traffic conditions. Lane detection consists of specific types of primitives such as road markings etc. lane detection represents the margins of path into a single framework. It supports various applications like lane departure warning, lane keeping assists, lane centering etc. Lane departure warning gives us a warning when the vehicle is veering off the lane without signaling. Lane detection also plays an important role in advanced driver assistant system. This system helps the drivers in the driving process. This system is developed for safety and better driving. This system based upon vehicle to vehicle or vehicle to infrastructure system etc. Advanced driver assistance system consists of collision avoidance system, blind spot system and many more systems. In lane detection there are many approaches that are applied like feature based and model based. Feature based approach are used to detect edges and model based approach is a type of curve model

In poor illumination scenes, lane markings are unobvious and noises  may appear on the image. Moreover, vehicle headlights, tail lights, road lamps and reflected light appear in scenes and will disturb the detection result. 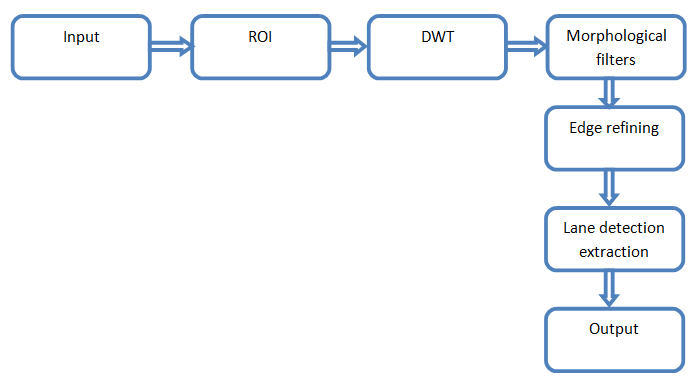 Thus the lanes are detected using this system, by this we can reduce the accidents and we can increase the efficiency of the semi-automated cars and fully automated cars.